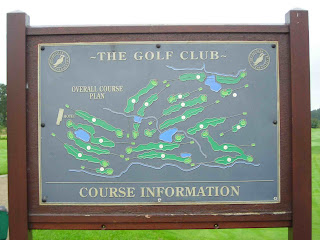 [Photo: the excellent course map by the 1st tee- gives you a great idea of what's to come]

The first thing to say here is that, as part of a hotel, you’re likely to pay over the odds in the bar. Up North I have become accustomed to paying £2.50 for a pint, which is excellent value (and is rapidly turning me into an alcoholic). At the Hilton it is £3.30. Apparently members only pay £2.00, so if you’re playing here, find a member and stay close!

As I got my gear together for a morning round I was amused to see three joggers heading down the 1st. But as I progressed around the course, past the swan-filled ponds and beside a small river, I could see that it would make a gentle and pleasant morning run.

I was told that the 12th was five feet underwater when the floods came in mid August, and yet it was open for play two days later. The greens are superb (even if they look oddly dark at the moment), and they are so well raised that I doubt the rising waters touched them. I asked Frank Ainsworth (greenkeeper and a course architect in his own right – he created the 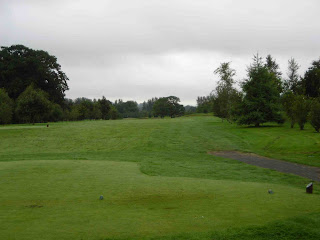 excellent Gracehill, among others) about the greens and he said they were dressed with Sodium oxphate, or Nitrous oxide or Iron filings, or something. Chemistry was never my strong suit at school, and after failing yet another test I had to write out the Chemical table ten times. Didn’t do much good though. All I remember is that Fe is iron, K is Kryptonite and O2 is a mobile phone company.

[Photo: the par five 5th - showing how the course still needs to establish its maturity]

At Templepatrick the greens are remarkable creations. They’re so big and so curved and sloped that four putting is feasible. Interestingly they’re also very firm – to the point it’s difficult to stop the ball.

From one of the tees I looked across and saw a man walking three big dogs. Being a dog fan, I watched, and, later, I saw them lying at their master’s feet as he talked to one of the greenkeepers. I confess that I wandered over to introduce myself to the dogs, and ended up talking to Danny – the local landowner – and the aforementioned Frank, for quite some time. Hearing how courses have come about is always intriguing (even if not relevant to my book), but finding out that Frank was an architect was an interesting twist. He designed Edenmore and Foyle, but it is Gracehill that I liked most.

Later, back in the car park, Frank appeared with the pro, Marcus, alongside. Marcus asked if I’d had any problems with any of the courses along the way. I mentioned that of all the courses in Ireland, only Mount Ober had turned me down. According to the boys, they’d done me a favour! I of course have no comment.

A couple of things to note – the par four 18th will soon become a par five. At the moment it is Index 9 and it’s 444 yards. The marker boards on tee boxes are good, but the water is misrepresented on 2, 3 and 4, so don’t be surprised to find water where you’re not expecting it. 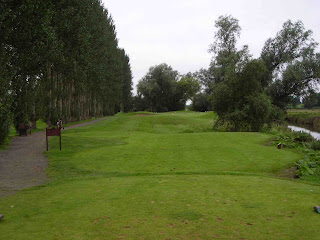 The Seniors Irish Ladies Open is going to be held here in a couple of weeks so it’s an up and coming course – but I would be interested to know what other people think of it.