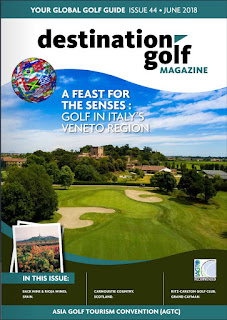 Sometimes you get lucky. Trips to Scotland are a bonus of monumental proportions for an Irish golf writer and visiting Carnoustie Country was particularly special as things ramp up ahead of the Open Championship, this July.

When we visited in April, the stands were already going up and golfers off the 1st tee were rattling their drives into the notorious Barry Burn, on the left of the fairway, or into the stands on the right, behind the 16th green (seen on the left in the photo below). It's nothing like as generous as the 1st hole at St Andrew's but those butterflies in your stomach as you prepare to make your first swing are just as busy.

To read about the area, the beautiful courses on offer (many you won't know) and some of the best gin and whiskey you'll ever taste, take a look at this month's edition of Destination Golf. Click on the link and the

Read more »
Posted by Kevin Markham at 2:13 PM No comments:

The countdown is on to the world’s biggest amateur team golf event… and it’s in Ireland.
It is just under 100 days until the World Amateur Team Championships tee off at Carton House on 29th August. The Championships are coming to Ireland for the first time in their history and the two tournaments – the Eisenhower Trophy (men) and Espirito Santo Trophy (women) – will see top amateur golfers from over 72 countries competing over the Montgomerie and O’Meara courses.
These Championships are the breeding ground of many for the most famous names in golf. Jack Nicklaus, Tiger Woods, Sergio Garcia, Colin Montgomerie, Martin Kaymer and Rory McIlroy have fought for the Eisenhower Trophy, a tournament which dates back to 1958. The Espirito Santo Trophy came a few years later, in 1964, and Suzann Pettersen, Paula
Read more »
Posted by Kevin Markham at 11:14 AM No comments:

I have been extremely fortunate to play Royal County Down twice in the past month. Both times it was a fine day and the gorse was in full bloom. I took photographs by the dozen - if you follow me on Twitter or Instagram you'll have seen numerous shots - and played some half decent golf. This is, after all, not a course where you want to be playing anything less than half decent golf because balls disappear into deep rough and gorse in the blink of an eye, and blind shots will bamboozle you.

On the other hand, if you're the No. 37 ranked amateur in the world you're unlikely to be worrying about losing balls and be far more concerned with making birdies.

On Tuesday, I played with Kristoffer Reitan, from Norway. Accompanied by Marcus - his caddie, coach and former Pro golfer himself - they are aiming for big things by year end. Kristoffer is 19 years old, is long off the tee (he drove the par four 16th, 337 yards) and has the short game to make it if his ambitions bear fruit. It was a privilege to play with such a talented young man. He made three birdies and few mistakes... and those he did make he recovered from. His first visit to one of the dreaded bunkers was followed by a 150 yard shot from the sand onto the green.
And after Round 1 of the Flogas Irish Amateur Open he's in a strong position. A 2 under par 69 has him in joint 4th. A certain Robin Dawson, from Tramore, blew the course away with a 65, but there's a long way to go yet... starting today. (All Round 1 scores are below.)

Posted by Kevin Markham at 8:34 AM No comments: