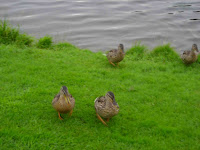 OK, so maybe ‘attacked’ is an exaggeration, but I was certainly intimidated. I had just teed off over the big pond on the 5th when three ducks swam in my direction, climbed out and headed straight for me. I swear they had a look in their eyes, and my drive hadn’t gone anywhere near them. They came to about five feet, shook their heads, shook their tails, expressed their displeasure and then dismissed me. As I made a hasty getaway I passed the yellow society tee which sits in the water. About 40 ducks watched me pass. It was all far too quiet and I fled. Back in the clubhouse, I heard someone informing their group that they were playing off the yellow tees. I nearly voiced my concerns but realised they’d think I was mad.

After Padraig’s brilliance in America, it was enough to inspire some brilliant golf – ducks aside. Have you ever found that? When you watch the best it seems to affect you mentally. Maybe you slow down and keep your head still. 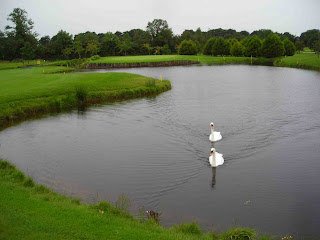 Anyway, it worked for me at Craddockstown and I went around in good time, dunking just one ball in the water at the very difficult, but short 10th. If you get around this newish parkland track without dumpling a ball in the water (ponds and streams – some hidden) you’ve done very well indeed.

It was the day after some seriously heavy rain that flooded parts of Dublin and Kildare, but the drainage here had done a terrific job. Only the bunkers looked obliterated, with those tell-tale tracks drifting down through the sand. Water remained in many of them, but clearly it had gone down. When I reached the par three 15th, there were two very nice balls (one a ProVI) clearly in view under water in the bunker. After that I kept checking every bunker – quite a task as Craddockstown likes its bunkers. 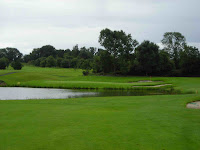 Posted by Kevin Markham at 7:32 PM