It was a long time ago when I first visited Enniscrone. I was 13 and I played a links that Eddie Hackett designed in 1970. The course had been here since the 1930s but now holes slipped into the big dunes that divided the links from Killala Bay. It was also in 1970 that Hackett extended Enniscrone to 18 holes. Such an expansion was a long held dream of the golfers who called this club home… but in what has become a common theme of the past five decades, Enniscrone was never happy to rest. Instead the push for improvement and expansion, be it to the course, the facilities or the clubhouse, continued year after year.
On Sunday two weeks ago, Enniscrone launched its centenary book. And while most tomes that celebrate a club’s longevity are penned by the elderly club historian, Sand, Sea and Sunsets: 100 Years of Enniscrone Golf Clubwas written by Cathal Mullaney, a young man just 23 years old.He has played golf at Enniscrone since he started at the age of 10 and has a special tie to the place. 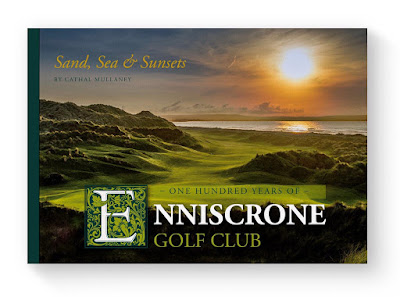 “I’m obviously biased,” says Cathal, who holds a degree in Journalism, Irish and Sociology and

Read more »
Posted by Kevin Markham at 12:36 PM No comments: