2008 has turned out to be the year of the Irish in terms of golf victories and establishing names on the world stage.

After Padraig’s victory at Carnoustie in 2007, there was a general feeling that he enjoyed good fortune after his balls-up of the 18th in his final round. 2008 put that feeling to rest with two great Major victories.

Darren Clarke returned to winning ways, twice, and yet he was screwed by Faldo when he wasn’t picked for the Ryder Cup. Not so Graeme McDowell, who also recorded two wins and became one of Europe’s best performers in the Ryder Cup. 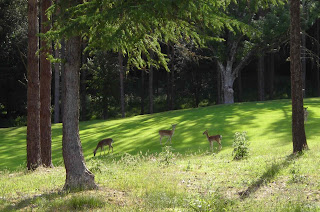 But perhaps even more promising was to see two new Irish winners – Damien McGrane and Peter Lawrie – and the rise and rise of Rory McIlroy. After a superb closing to the year he has guaranteed himself an appearance at all four majors next year. The beauty of young Rory is that there is a firm belief that anything is possible. And following December’s South African Open, 28 year old Gareth Maybin from Northern Ireland may also make a big splash in 2009.

Perhaps the biggest disappointment of the year was Padraig’s very poor performance in the Ryder Cup. Mind you, Faldo did as much damage with his mouth as his selection process, and bringing ‘potatoes’ into Padraig’s training regime may have been one vegetable too far for Ireland’s greatest golfer.

There was more good news as it was confirmed that The Irish Open will continue into 2009, thanks to mobile phone company, 3. There is still no decision where it will be held. After Mount Juliet and Royal Dublin were both touted as the venue, it seems that Baltray may get the nod. And with John Daly indicating he would like to play in the event again, there will a great buzz about the place come May 2009. 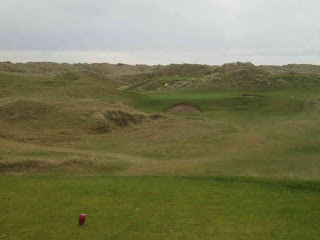 Luttrellstown Castle Golf Club it the dust – or it will do at the end of 2009 when it closes its doors for the last time. Luttrellstown is regarded as one of the big parkland venues that spent too much money. Truth be told, it’s a nice course, but nothing that special. And why the new owners felt the need to spend huge sums replacing one impressive timber clubhouse with another impressive timber clubhouse I’ll never know. Seemed like a good idea at the time, perhaps.

Other courses have struggled – and will continue to struggle in 2009 no doubt – with courses closed on weekdays, green staff and even managers laid off. Druid’s Heath hit an interesting jackpot: they offered 200 memberships for sale, for 2009, at €1,500 a head. Huge numbers replied (from 500 to 800 depending on where you heard it) and they took 360 of these. €540,000 in one swoop is not a bad day’s work.

In the Sunday Tribune’s December 14th edition, the owner of Hollystown, Oliver Barry, had a pop at Ireland’s tourist bodies for focusing too exclusively on Ireland’s premier resorts when they promoted Irish golf overseas. He backed this up by saying that at over 90 per cent of Ireland’s 420 golf courses you could play for €40 or less. That’s a bit disingenuous as he’s including some 100 nine hole courses – but he still has a valid point. However, these tourist bodies are changing their focus to promote the smaller clubs and while the quality of these is not as exquisite as Mr. Barry would have you believe, their value for money is beyond question. Portumna has to be the biggest example of this. For €30 you play a course that is big, natural and thrilling, and one of the best parkland courses in the country. Seriously. Play in the morning and watch the deer run around you. 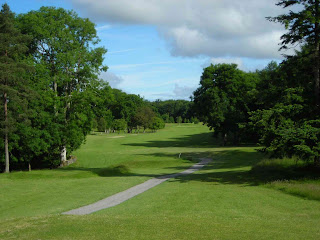 My final note is to say that there’s a decent spread on my travels in December’s Today’s Golfer Magazine – Issue 251 – if you’re remotely interested! The only downside is that I have already been tagged with the title of the article – White Camper Van Man. Still, it’s better than my previous name which I acquired after a year in Australia, delivering ‘health’ food ice-cream to stores in Sydney. Made of Tofu it was utterly revolting, but I still ended up being called Mr. Whippy.

Posted by Kevin Markham at 6:09 PM No comments: 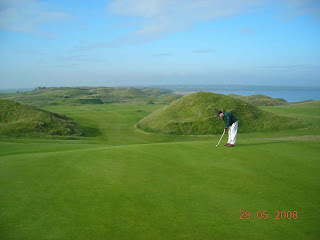 [Photo: Fin on the 2nd green at Ballybunion Old]

Interesting, isn't it, how people writing a book on golf courses decide which qualify as 'best' or 'most spectacular' I was in Easons bookshop the other day and I saw the mightily impressive
Golf Around the World: The Great Game and Its Most Spectacular Courses by Fulvio Golob, Giulia Muttoni, with a foreword by Adam Scott.

It's a huge big hardback book and it looks truly stunning, with superb photographs and a sparkling bit of commentary on the 50 chosen courses.

One of the key things about my book is that it is subjective because the sole author (i.e. me) is an amateur golfer. During my recent visit to the NEC Golf Show I had some interesting debates about which Irish courses qualified as good and which qualified as bad. But a book as big as Golob and Muttoni's, with two authors, would, presumably, call on some wider expertise and opinion. So I was rather stumped by the two courses that were picked from Ireland. Ballybunion was one, and I agree wholeheartedly, but selected ahead of Royal County Down, The European, Waterville (pictured), Royal Portrush, Tralee, County Sligo and 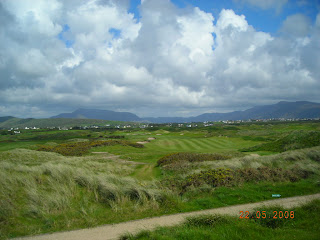 even Carne and Enniscrone... was Portmarnock. What a bizarre choice. It is a tough course for certain, but it doesn't qualify as "spectacular". It is surprisingly muted in fact - the dunes rarely get above head height, it sits in the middle of busy Dublin bay and you nearly always have plenty of the hole on show. How does that make it spectacular? Old Head of Kinsale, for all its faults, is spectacular beyond belief, as are all of the courses I listed above.

Of the 50 courses, 8 are in Scotland - which makes Ireland's tally of two seem even more paltry - especially when you consider that we are regarded as having some of the greatest courses in the world.

It just proves how subjective golf can be.