It's no secret that Druid's Glen is one of my favourite courses. I love the place, so when they bring out a great offer I'm going to be shouting about it as much as I can... even if it does proclaim "Golf Madness"! 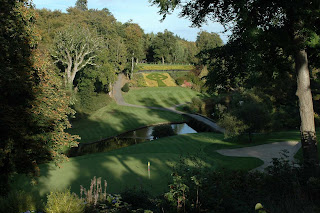 [Photo: the impressive par three 12th, from behind the green and back to the tee]
On the back of the Irish Times today they have an offer of 1 night's B&B plus golf for just €75 per person sharing, midweek. Oh, and it's UNLIMITED golf. I'm not exactly sure what that means, but here's my itinerary: I'd arrive at 3pm, get out on the course for a round, then back to the hotel (or may I recommend the downstairs restaurant at The Hungry Monk, in Greystones - but you'll need to book). Up in the morning, breakfast, then straight to the course for the second round. Into the clubhouse, have lunch, then get back on the course for the third FREE round. 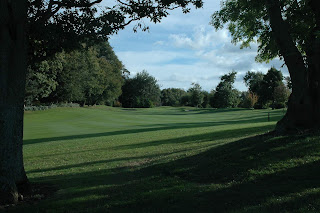 [Photo: the par four 3rd, a short par four but a dogleg left that fools many]
How much better does it get. The whole thing about Druid's that trumps Mount Juliet and the K Club is the pure vibe of the place, the different pace of the holes and the thrills at every turn. It's a real thinker's course. And the greens are in superb shape right now.
The offer is subject to availability of course, and much will depend on how you plan to put up with your golfing partner's snoring (or maybe it's your wife's... or your husband's), but if you fancy sneaking away midweek for some quality golf, then it doesn't get much better than this.
Who knows, Druid's Heath may even be part of the deal, but that's a tough course.
Check out www.druidsglenresort.com or call 01 287 0847.
Posted by Kevin Markham at 9:23 PM No comments:

There's been a lot of hand-wringing over Rory's final round collapse on Sunday night. Alot of sympathy too. More worryingly, though, there's been a fair bit of criticism!
People have objected to his level of tweeting when he should have, they imply, been out practising. Or, they say, he's been a professional long enough that he should have the mental fortitude to overcome such pressure. I find such arguments cruel and baseless.
I'm not actually fussed by his age and the argument that he has plenty of more time and that eventually he will realise his enormous potential. My argument is that every golfer has a weakness... and the truly great golfers tackle these head-on and overcome them.
Jack Nicklaus had one: back in 1972 he struggled during the third round of the Masters (although he still led by three shots), failing to find the ball flight he needed on his iron shots. He couldn't achieve the height that Augusta's greens demanded. He walked off the 54th hole, went to the practice tee, and practised and practised until he got it right. He went out the next day and won.
I don't have similar stories about Ben Hogan or Arnold Palmer - but they'll be out there - but Tom Watson was known for his failings on short putts... even though he was regarded highly for his putting. He won 8 majors and was number one in the world between 1978-1982. Rory can take heart from that.
And, needless to say, not all weaknesses are on the course... need I mention Tiger's?
Rory will get better. Everybody knows it. Perhaps what he did on Sunday at the Masters, was to scare the bejaysus out of us, and himself, and prove that youth, exuberance and bundles of talent can have their limitations when the pressure is on. Footballers miss penalties, rugby players drop the ball, tennis players blast it long... and golfers have so much precision in their swing that the tiniest, microscopic bit of self doubt can produce an unravelling of gargantuan proportions in front of millions of viewers on a Sunday night.
And a congratulations to Schwartzel for a stunning finish and a deserved win.
A good article I found:
http://www.setanta.com/ie/Blogs/Malachy-Clerkin/2011/March/Rorys-Story-More-Sad-Than-Bad/
Posted by Kevin Markham at 8:26 PM No comments:

Rats in my golf bag 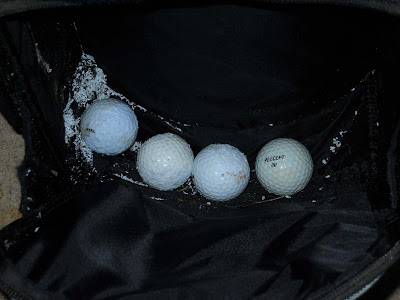 Now that winter has finally passed, I went out to the shed to drag out the big golf bag. It had been gathering dust since I swapped it for the light carry bag in October. In that time it had gathered something else as well: turns out, a rat had beaten me to it.
He'd clearly spent some time in the ball pocket, sampling the different delights of Taylormade, Titleist and Nike... although he turned his nose up at the Precept. It's good to know that rats have good taste in golf balls. 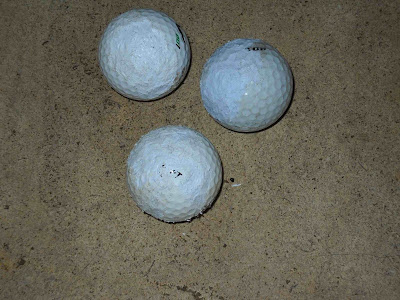 Posted by Kevin Markham at 7:40 AM No comments: 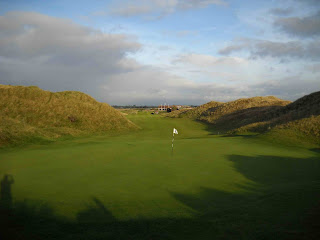 [Photo: The Island's 1st hole, green to tee]
Every year magazines/websites produce their 'best courses' list. It has to be done because golfers were born to compare - be it their swing, their handicap, their clubs or their sweaters. And every year, when a 'top courses' list comes out, golfers everywhere mock it. I count myself among them.
The trouble is, as soon as you have more than one person compiling a list, the chances are that NOBODY is going to agree 100% with that list - not even the people who compiled it, because it's all about averages and/or points. That's the very nature of producing lists by panel. 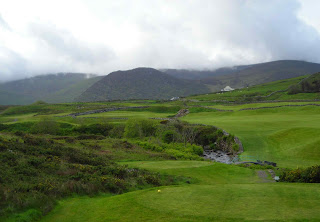 [Photo: Skellig Bay's par four 4th hole]
Golf Digest Ireland produces the Top 100 courses list that most people pay attention to in this country, and every year there are some right howlers that sneak in or get left out. They take a lot of stick for their choices and, no matter what system they appear to use, there are always rumours that something fishy is going on.
So, this year, they've decided to get us day-to-day golfers involved, by offering 10 people the chance to be a part of their panel. 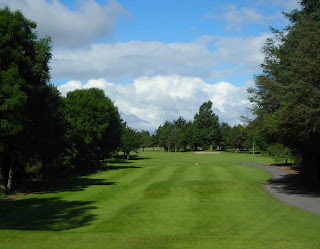 [Photo: the claustrophobic pine trees at Shannon]
If you’re selected, you’ll be required to play 15 courses between April and September. You’ll even be trained in how to review the courses. That's something that I would be fascinated to find out. I imagine it's about specific things to look for and how to rate particular parts of the course/club.

And here's the important bit - you play these courses for free! So, who knows, you might get to play the likes of Old Head of Kinsale (47th in 2010 ranking), The Island (12th) and Adare (8th) for free. Or it might be some of the less known courses, like Skellig Bay (87th) , Balbriggan (77th) and Shannon (72nd)... but it's free and you get to boast that you're part of the panel that decides the best courses in Ireland for 2011.
And how do you put your name forward for this? Simple! By email or phone. 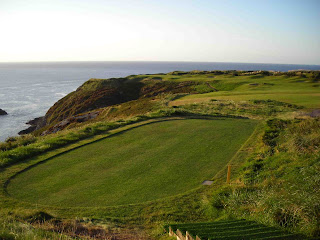 Posted by Kevin Markham at 6:31 PM No comments: