I’ve never had an issue admitting that I’m wrong about a golf course… some courses which I simply loved a few years ago have waned slightly as I have played them again or played their peers and – how shall I put this – rebalanced my opinion. Of course, the same is also true: a course I was distinctly tepid about has warmed my heart the more I have played it.

Surely you feel the same way yourself!

And then there are the courses where your feelings never change. You love ‘em, or you hate ‘em and nothing’s going to alter your view.

Read more »
Posted by Kevin Markham at 11:16 PM No comments: 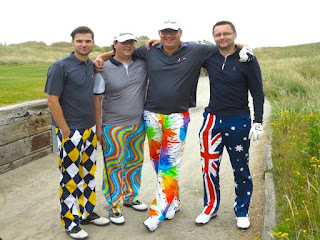 The Irish Golf Tour Operator Association (IGTOA) had its annual shindig in north Dublin earlier this week… culminating with a black tie gala dinner and awards at the Grand Hotel in Malahide. So here’s a list of the winners who can bask in a little home-grown love for the next year.

Read more »
Posted by Kevin Markham at 9:37 PM No comments:

It’s not often you get to visit six Irish golf courses in a day… the fact I was trying to make it to seven is beside the point… but needs must. And visiting Ireland’s finest is hardly a hardship. A 550 km tour from Wexford-Dublin-Baltray-Mullingar-Kinnegad-Dublin-Wexford.

Here are some photos from the tour:
Read more »
Posted by Kevin Markham at 8:57 PM No comments:

There have been numerous interesting developments in recent weeks as the summer/autumn golfing season begins to wind down. No question, we’ve had a great couple of weeks and for those lucky enough to have been on the golf course, many have been basking in sunshine. It should inspire the warm-weather golfers to keep going a bit longer.

Here are a few bits and pieces worth talking about:
Read more »
Posted by Kevin Markham at 10:54 PM No comments:

Who among us doesn't love the Ryder Cup? Seriously, if ever golf needed to stir passions all the powers-that-be need to do is look at and learn from the Ryder Cup. Every hole is a win or lose scenario... if only the Olympics would pay attention. This is the way to show the world what golf is all about.

True, a portion of the American fans proved PJ Willett 100% right, which is an omen of things to come. Those powers-that-be need to do something to stop the craziness because someone's going to get hurt. Stop serving alcohol at 7.30am perhaps?

I've written two articles in recent days - one for the Irish Examiner and one for the weekly online Irish Golfer Digital+. The Examiner piece focuses on the desire of the golfing world and media to generate a 'Blame Game' mentality. All the reasons for potential failure and who's to blame get lined up like dominoes... just waiting to be knocked down as soon as the winning putt drops.

The other article is more tongue-in-cheek and addresses some 'questions' which get me riled up about the Ryder Cup... such as WAGS, merchandise, slo-mos and mashed potatoes.


Posted by Kevin Markham at 8:26 AM No comments: