Irish Golf - A Show of Strength

Ladies Get into Golf going from strength to strength

The GUI has often been accused of being sluggish and slow to react to issues affecting our game but moves over recent years have – one hopes – altered that perception. No doubt there will still be gripes about this or that but progress has been made to coincide with international changes.

Most golfers with any interest in the industry are well aware of the challenges facing the game. The cost, the time involved, the commitment (to play well), slow play, handicap manipulating and, of course, the issue of formality that clings like
Read more »
Posted by Kevin Markham at 10:28 PM No comments:

Let's not beat about the bush... there are Irish holiday breaks galore around Ireland at the moment, with many of these targeted at golfers. If you tie accommodation and golf together you have an easy and attractive mix. The challenge is finding one that fits your budget and appeals to your golfing ambitions... and given the volume of courses and hotels at our disposal that is hardly going to be an arduous task

From the high end offers (K Club, Castlemartyr and Lough Erne), to the astounding
Read more »
Posted by Kevin Markham at 10:15 PM No comments:

The Links at Portmarnock have a special Winter Pass at the moment. Running from January to the end of March, it's a very tasty deal.

For €550 you get unlimited golf between now and the end of March, seven days a week, playing off the turf... so no mats required. There are plenty of golfers who have memberships at Dublin parkland clubs who may not visit their home courses during these quiet months because of temporary greens, wet fairways and bunkers out of play due to flooding... so this offer ensures top quality golf for the next three months. If you like, look at it as keeping your eye in for the main season ahead. 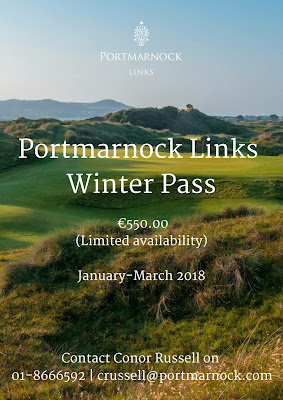 And who knows, maybe you'll like it so much much you'll want to join Portmarnock Links full-time.

Posted by Kevin Markham at 11:36 AM No comments:

Top and Tail - the perfect end/start to the year

Sometimes you just get lucky I guess.
On December 31st, four of us rolled up to Druids Glen. The sun was out, trying to ward
Read more »
Posted by Kevin Markham at 5:05 PM No comments:

The GUI announced the following today:


Euro prize limit reduced in Ireland for amateur golfers
Following requests from affiliated golf clubs in Ireland, the Amateur Status Prize Limit in the Euro area in Ireland will be lowered from €750 to €575 and will take effect from 1st February 2018.
The move, which is supported by The R&A following requests for consideration by the Golfing Union of Ireland and the Irish Ladies Golf Union, will ensure that the Prize Limit for amateur golf is now better aligned to the Sterling Pound limit of £500 and continual review of this will be undertaken by both Unions to assess the impact of this change.
Speaking about this decision, Pat Finn CEO of the Golfing Union of Ireland said: "The feedback from our clubs was that the limit was set too high in the Euro area and it needed to be brought into line with that of the Sterling zone. Working with the Irish Ladies Golf Union we approached The R&A and they supported the lowering of the limit. We welcome this support from The R&A and both Unions will monitor the effects of the change over the coming months.”
Under Rule 3-2a of the Rules of Amateur Status, which are jointly approved by The R&A and the USGA, an amateur golfer must not accept a prize (other than a symbolic prize) or prize voucher of retail value in excess of £500. This limit applies to the total prizes or prize vouchers received by an amateur golfer in any one competition or series of competitions, but does not include hole-in-one prizes. Under Rule 3-1, an amateur golfer must not play for prize money of any amount.

I'd be pretty certain that we all know someone who has won a prize that threatens the €750 limit... let alone €575. There has been a trend since the early 2000s to increase the value of prizes to ever greater heights. It seems to be almost an ego thing, especially with Captain's prizes.

In my opinion such significant prizes (holidays, TVs, sets of clubs) only encourage cheating, in its various guises. I hope that ALL organisations running amateur golf tournaments take note and appreciate that bigger prizes don't mean better competitions... sometimes the exact opposite.


Posted by Kevin Markham at 7:55 PM No comments: