Many years ago I met a fourball of elderly gentlemen in a Greystones bar. They looked beat, despondent, even distraught. They had played Druids Heath, and they were drowning their sorrows after their round. It was their first visit to the course and, they said quickly, their last. 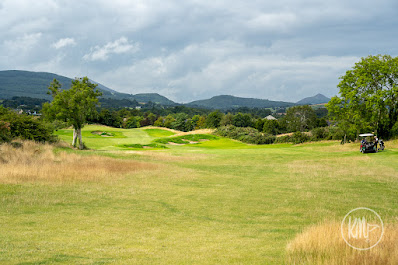 Up until this year, Druids Heath was not a kind course to high handicappers, short hitters or those of a gentler age. It was punishing, long, dressed with 97 large bunkers and big, fast greens. You couldn’t always see the landing zones and when the gorse shone bright it set off fire alarms in a golfer’s head.

It was a brute that required your ‘A’ game for 18 holes because the Heath showed no mercy. It was never high on my list of favourite courses. 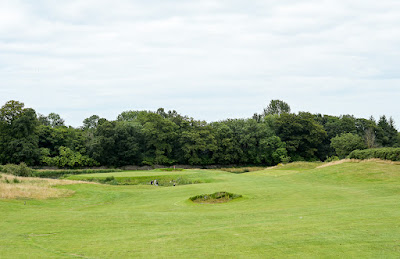 I’m not for a second saying it was a bad course… just too tough for a ‘fun’ round of golf.

But things have changed. New owners (the Neville family) have pumped €1 million into the Heath, calling on the skills of one of the original architects, Peter McEvoy, and (re)Golf, alongside Turfgrass.

“We are re-landscaping the existing bunker footprint (over 30,000m2), adopting a more handcrafted bunker and landform layout, each with their own individual function and character, while maintaining diverse strategic values which engage golfers of all abilities,” said a recent press release.

That’s all fine and well but until you see what has been done it’s impossible to visualise. I visited last week and was amazed at the changes. The holes and the routing are the same but there is a very different feel to the place thanks to new bunkering and a new approach to fescue grasses. There are other unseen elements too, but we’ll get to that. 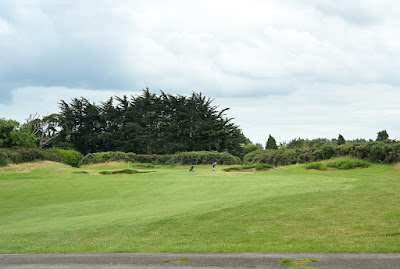 The key here is visual accessibility and visual appeal. The 97 big bunkers have been reduced to 36. Many of the greenside bunkers have been removed entirely which makes the greens more accessible targets. The greens, after all, are an essential highlight here… and they have always been one of the most testing aspects of the course.

The change to the bunkering is massive. Consider what happened recently at the Hermitage. It was a major upgrading of the course’s bunkering but it still fitted with what was there before. At Druids Heath that is not the case. From big, open bunkers there are now smaller, deeper and sharply shaped, with high sides and a high penalty tariff for hitting your ball in one. That reduction of 63 per cent seems like a huge shift… and yet there are more than enough bunkers to keep you on your toes. With fewer bunkers protecting the greens it also means that low shots, of a bump-and-run nature, present themselves on several occasions. That’s an entirely new aspect to the course. 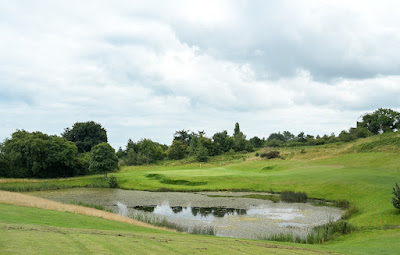 Some of the new bunkers are positioned where old bunkers had been… but by no means always. On the par-4 18th one single, new bunker occupies less than half of one of the old bunkers. Some bunkers have been nudged into fairways: on the par-5 2nd a small lone bunker awaits in the middle of the fairway, a serious threat to your second shot as you lay up short of the ponds. It calls for a different game plan… although the fairway has been widened down by those ponds. 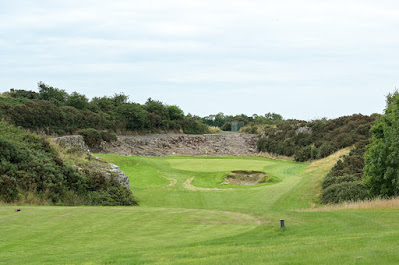 On top of that the bunkers will use Sportsbond, all sand will be replaced, and Ecobunker has been used in several places where bunkers are cut tight to the greens. The brows of these bunkers will be blanketed with golden fescue grasses and a texture like sun, adding to the difficulty (see photo of 18th: those dark green edges will burn gold in the future) and, undoubtedly, drawing the eye. The final comment on the bunkers is this: avoid them. They are deep – the famous par-3 14th now has a bunker tucked in hard to the green which that will leave you five feet under the pin – and you may find some awkward stances.

This is the most obvious change but not the only one: the back Blue tees have all gone, making the course some 400 yards shorter; certain fairways have been widened; some fairway shoulders have been removed to enhance hole visibility – on the 9th and 10th most noticeably; small fescue-covered mounds appear on some holes, adding aesthetic appeal, and blending with the blazes of fescue chaperoning fairways; and a lot of gorse has been removed to speed up play and, again, to improve aesthetics. I won’t go through every hole but there are plenty of subtle and less subtle differences. One honourable mention must go to the quirky and difficult par-4 13th which has lost a tree defending the fairway on the left while the lake beneath the green will be reduced in length by 20 yards to create the hole’s only level landing area. The tree fronting the green has also gone. 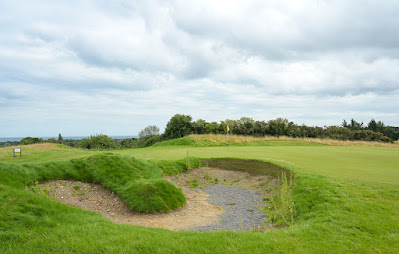 I mentioned the unseen elements. There are several. The 28,000 metres of slit drainage across 15 sections of the course for starters. Playability was never an issue but this drainage will add extra bounce! There’s the Sportsbond in the bunkering and the grasses on greens have all been swapped for Crystal Blue Bent grass… which looks every bit as good as it reads.

Once it is all completed – laying the bunkers finished in late July – Druids Heath will be a more friendly course to play… and members are already expressing their approval at the changes. It is no longer overwhelmed with sand, it offers different strategies for golfers of all abilities, it is more playable and the efforts to give it a more links-like appearance have given it extra bite.

My ‘Hooked’ review of the course will certainly be changing.

Posted by Kevin Markham at 8:43 AM No comments: