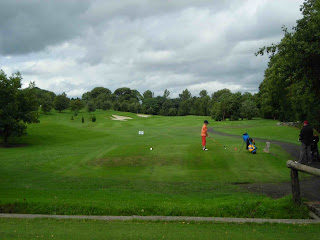 [Photo: The Byrnes tee it up on the current par four 1st]

When I met Tom at Kilcock he asked me a question that made me stop in my tracks.
“Do you understand golf?” he asked me.
“How do you mean?” I replied.
“Well,” he continued, “if I say the hole’s a par three will you know what I mean by that?”

Yes, I was a bit confused too. It’s difficult to write a book on golf courses if you don’t know how golf works. Having said that, I remember a guy I met in London who had just written a book on back-packing in Australia. When I asked when he had been in Oz, he said he’d never been. “I just phoned the Australian Embassy and asked them to send me all the books on travelling around Australia,” he said. “Then I just put them all together.”

Kilcock is undergoing major changes. 9 holes have been upgraded, and the other 9 are, quite literally, going under the knife in the next few days. At the moment, only 9 holes are open and you start at the old 6th. I encountered Kevin Byrne and his nine year old son on the 1st hole. I suppose I should stop being surprised when I meet golfers who know the same people I do. Kevin has been trying to get Neville Galloway up to Kilcock for some time – Neville was Greystones’ Captain in 2007, and gave one of the most hilarious speeches I’ve ever heard at the Captain’s Day Dinner last August. Nice one, Neville.

Kevin pointed at the fantastic new greens and asked if I knew where they had come from. They’d come from the old Bray course. Quite literally, carved off the old course and dropped on the greens here at Kilcock. It’s certainly worked. But there’s only one problem: the old Bray course was a 9 hole course – so where are the next 9 greens going to come from? 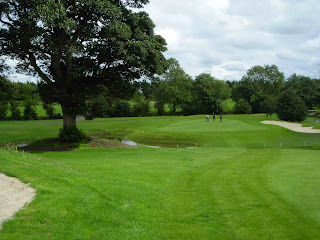 As Kevin walked off the 1st with an easy par his son held up his putter and proudly proclaimed that his score was four over. I hope he’s keeping a close eye on the rise of Padraig Harrington into the echelons of golfing greats. And perhaps, if he needs some inspiration from someone closer to his age, he should watch the name of Greystones’ own Paul Dunne.
Posted by Kevin Markham at 8:49 PM