The game of ‘What if’ is as claustrophobic as it is pointless in golf… but it’s also unavoidable. Think back to your last round and the small mistakes you made: a missed putt, an aggressive
Read more »
Posted by Kevin Markham at 10:28 PM No comments:

All of the attention may be on Lahinch and Royal Portrush golf clubs at the moment – and for good reason – but other Irish clubs are flexing their muscles with important events, anniversaries and announcements. One of these is the glorious Slieve Russell Hotel, Golf & Country Club, in Co. Cavan. (See below for details of their Open Week 21-25 July.)

In June, the resort received the designation of PGA National Ireland, making it only the 8th PGA National-designated resort in the world. That’s a serious accolade and one which reflects both the quality of the highly acclaimed Paddy Merrigan-designed championship course and the resort’s extensive facilities. It would be easy for something like this to slip below the radar but that shouldn’t be allowed to happen.

At the official ceremony, PGA chief executive Robert Maxfield said: “We are delighted to welcome Slieve Russell to our exceptional list of PGA Branded Properties. The PGA National – Ireland further strengthens The PGA brand’s reputation internationally and we look forward to promoting Slieve Russell to both PGA Members and golfers across the globe.”
The PGA was formed in 1901 and is the world’s oldest professional golfers’ association. It is based at Centenary House, at the famous Belfry in Warwickshire, and boasts over 8,000 members including 1,600 working overseas in more than 80 different countries. The PGA is one of golf’s leading bodies and it is committed to growing and developing the game nationally and internationally through the expertise of its professionals. It was the PGA, in conjunction with Samuel Ryder and The PGA of America, that founded the now world-renowned Ryder Cup match, which has thrown up so many famous Irish golf moments – not least Christy O’Connor Junior’s unforgettable 2-iron at the Belfry itself, in 1989.
Slieve Russell’s designation follows a period of sustained strategic investment by the resort to build its business, both on the island of Ireland and internationally. This has seen major investment to upgrade both the golf course and the resort’s many other facilities. It has helped Slieve Russell reinforce its position as one of our leading hotel, golf and country club resorts. Greens, tees, fairways and bunkers continue to be improved, while the development of the Golf Academy includes state-of-the-art video and swing analysis technology. In the 222-room hotel, the banqueting, conference and event facilities received a major upgrade, as did the award-winning Ciuin Spa. Weddings abound and many a happy couple can be seen heading out onto the golf course to have photos taken by Lough Rud, with swans and geese on the water and the famous ‘SR’ hedge perched on the lough’s edge. (This also happens to be Slieve Russell’s signature par five 13th hole.)
Head Professional, Gordon Smyth said: “This is a really proud day for the entire team here at Slieve Russell, recognising as it does not just the quality of the Championship course but the other golf facilities and academy we have built up over the years. We believe our designation as PGA National Ireland is reflective of this work and to join a club of just eight PGA National designated resorts worldwide, including the likes of The Belfry and Gleneagles, is a huge honour and reflective of the quality of Slieve Russell as a venue for golfers of all levels and abilities.”

Signs on the course have all been updated to reflect Slieve Russell’s new-found status, including a large silver banner by the 1st tee, where Colm Moriarty was photographed in late June after winning the annual Slieve Russell Masters Pro-Am. He wonby eight shots, with rounds of 65 (-7) and 67 (-5). He joins a list of high quality names including Neil O’Briain, David Higgins and the legendary Eamonn Darcy, all of whom have won the event three times.

“I played some very good golf, maybe right up there with some of the best golf I’ve played because it is a really tough course, a great test and one that improves every time we return,” said Colm Moriarty, who made not one bogey in his two rounds.
The PGA National designation ensures that certain standards are maintained and the quality of the course today is as good as anywhere in the country. The PGA mantle also provides the resort with excellent marketing opportunities, especially on the international stage. It helps of course that exceptional bragging rights already exist with Slieve Russell being the home club of Irish golfing sensations Leona and Lisa Maguire. The Maguires turned professional in 2018, after stellar amateur careers, which saw Leona twice ranked as the world’s number one amateur, and twin sister Lisa winning 15 amateur titles. This is where they learned to play.

Located just 90 minutes from Dublin, the course opened in 1992. It flows over the drumlins of Co. Cavan, with the back nine containing some of the best holes in Ireland. Today, twenty seven years after opening, Slieve Russell has further cemented its position as a top tier Irish parkland and The PGA Ireland designation has made that abundantly clear.

Open Week is Coming
If you want to play this peach of a parkland you can... next week in their Open Week. For a cost of just €30. Get booking. 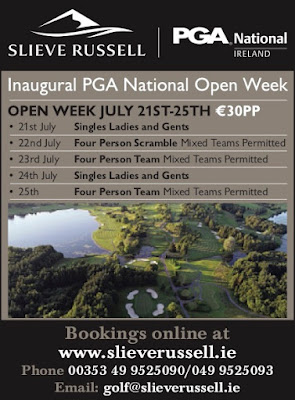 Posted by Kevin Markham at 1:53 PM No comments: