The power of a rumour has become ever more potent in the digital – and specifically social media – age. One wrong word, one slip, one misinterpretation… and your world can turn upside down. Facts are misconstrued, quotes are taken out of context, spite bares its soul.

Take a President starting his own idiotic rumour that Covid-19 can be tackled by injecting disinfectant and many of us are waiting for the first deaths by bleach ingestion to be announced. His fixation with hydroxychloroquine has already caused the death of an engineer in Arizona who consumed a fishtank cleaning chemical believing it contained the Trump-touted cure. OK, so the word ‘rumour’ should probably be replaced by ignorance… but the two often go hand-in-hand.
On the golf front we’ve all heard rumours about this and that and it’s not always easy to separate fact from fiction. I read an article some eight years ago that suggested Co. Sligo had been selected to host the Irish Open, and foolishly tweeted about it. Someone was having a laugh, started the rumour and I compounded it.
At the moment the most dangerous rumours circling Irish golf are the ones claiming that courses are closing. Such rumours are like sharks scenting blood and no sooner does the rumour start than more predators emerge to get their teeth into the story.
What we do know is that Killorglin GC has gone and so too Castleisland GC**. They were near neighbours (30 km apart) and they closed within a week of each other. I know of one other course that is supposed to have closed… although I won’t fall into that trap again… and there are undoubtedly rumours swirling around others.
Interestingly, a club that is located between these two Co. Kerry courses, Beaufort Golf Club, is another venue rumoured to be closing. Last Saturday was the first time I heard about this one… and the only reason it came to my attention was because the golf club contacted me to make it clear the rumour was false. 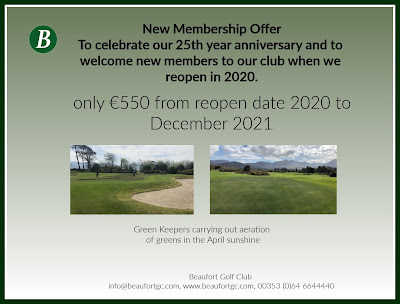 “There are rumours being spread that we are closing,” said Fiona Dunne, Marketing Manager at the club. “This is far from the truth. I want to put to bed that we are not closing and we are looking forward to a successful second half of the year, welcoming members old and new, and visitors too once we are allowed to re-open. Maintenance work is being carried out on a continuous basis, alongside the implementation of our BRS booking system and a refurbishment of the Pro Shop.”
The club is celebrating its 25th anniversary with a special membership offer as all anniversary celebrations have been put on hold. No doubt there will be some celebrations in the future, especially when the rumours of closure have ceased.
**Killorglin and Castleisland members are in the process of forming a new club to be based on the Killorglin course.

Posted by Kevin Markham at 4:43 PM No comments:

Does Golf Go Above and Beyond?

There are calls across the UK to open golf courses to the general public.
There is a movement in the UK that’s gathering momentum and it is already being muttered about over here. Should golf courses be opened to the general public?
Caroline Lucas, former leader of the UK Green Party, was one of the first to suggest it, specifically in more urban areas where green spaces are more limited… and where parks have been closed because people aren’t following the rules.
It makes sense, doesn’t it? Golf courses are vast green and pretty spaces where no one is hitting balls these days and people can enjoy fresh air without getting close to others.

You know what… I wholeheartedly approve of the idea. It’s fabulous.
On one condition.
These people respect the environment they are in. And that means the following:
1.     Every single dog crap has to be removed and disposed of responsibly, and not chucked in the nearest bush. Chances of that happening? 2 out of 10.
2.     No ball throwing for dogs onto greens where putting surfaces could be gouged by claws. In Scotland, where there is a ‘right to roam’, people typically walk their dogs on paths through the golf course, but at Prestwick – the birthplace of the Open Championship – they have a ‘neighbour’ who likes to throw tennis balls onto the green for his dog, thereby causing considerable damage. Chances of no ball throwing onto greens? 4 out of 10.
3.     No sunbathing or picnics on fairways, by ponds/lakes or in the woods. That’s one of the main reasons you got kicked out of the parks in the first place, you dummies. Chances of that happening? 6 out of 10.
4.     People don’t dump their rubbish wherever they choose. Chances of that happening? 0 out of 10.
5.     Natural habitats and wildlife are not disturbed by dogs or humans. Chances of that happening? 1 out of 10.
6.     No kids (or adults) cycling over greens, playing football, frisbee or any other ‘sport’ on fairways or greens. If there’s going to be any sport you can sod off and let us play golf. Chances of that happening? 0 out of 10.
7.     Dogs and/or children are not allowed to play or dig about in the bunkers, thereby damaging drainage, the banking or edges. Chances of that happening? 4 out of 10.
8.     No one brings a golf club with them to ‘practise’. No one brings a dozen balls and then leaves a series of unrepaired divots and/or unrepaired pitchmarks on the green. Chances of that happening? 3 out of 10.
9.     People obey all of the above rules. Chances of that happening? Absolutely zero.
Based on the above, any suburban course, be it Milltown, Castle, Elm Park, Mahon, Douglas, Shandon Park, Williamstown, Rathbane would be very generous to open its gates to the general public. It would be a strong showing of community spirit and social responsibility for these clubs (and all clubs for that matter) to make their courses so accessible… but then you also have to consider mundane details like insurance, security and health & safety.
And who is going to monitor the general public when they are enjoying the golf course surroundings? And who picks up the tab for the damage caused? Based on recent Twitter and Facebook posts, it is abundantly clear that it only takes a few morons on quad bikes or bicycles, with beer cans and/or dogs to damage a course and get every golfer's temperature up.
Ireland is fortunate to have cities that are nothing like the size and spread of those in Birmingham, London or Manchester, where green spaces are few and far between. I see the point of the arguments being made because it would be a fabulous gesture in these difficult times and I know that some courses have indeed opened their gates but the demands to open up Irish golf courses will be nothing like as intense. And, as restrictions are relaxed - in the next fortnight with luck - we golfers will be the first to experience courses where greenkeepers have been working so, so hard to keep everything in the best condition possible.

Posted by Kevin Markham at 6:53 PM No comments: