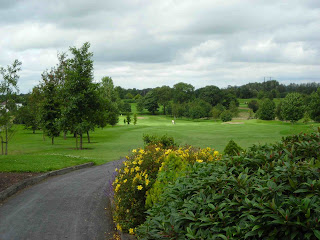 [Photo: Par four 2nd]
Naas is the kind of course that you rarely hear about – I don’t know why because it’s fantastic. The 18 holes are divided into two lots and I had heard that the newer, outside 9 wasn’t nearly as good as the original 9, recently redesigned by Jeff Howes. Even Denis Mahon, the Secretary/Manager, implied as much when we chatted beforehand. There’s clearly a difference but the outside holes are still good. They lack the heavy undulations of the inner 9, so they don’t look quite as imposing, and the presentation/playability of the holes isn’t the same – but I wasn’t complaining. When Mr. Howes finishes the job, Naas will be a perfect golfing destination.

My chat with Denis did raise one interesting issue: he was comfortable enough to say that one 9 was better than the other. I admire that and it is certainly preferable to being told how brilliant a course is – whether it is or isn’t. For instance, I had just finished my round at a course in the North West when the manager started telling me how fantastic the course was. He said that visitors found it so much better than the more highly regarded courses nearby. 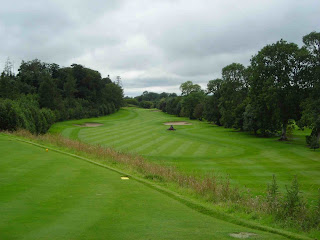 Personally, it was a load of rubbish. A course in Cork did the same, comparing itself with Fota Island and Cork golf clubs, when it isn’t in the same league. At least, not yet. You expect people to promote their home club, but you can go too far and raise expectations to silly levels. I’ve mentioned Castle Hume before - a golf course that sticks out more than any other in its claims of ‘championship’ quality.

For the purposes of my book, satisfying expectations is nigh on impossible. If you go to a course, e.g. Castle Hume, and you play out of your skin to score 48 points, then you’ll love the course no matter what I say. And the opposite is true too. Play a true links course in a howling gale and you’re unlikely to return any time soon. My book attempts to highlight what the course is about and what kind of experience you can expect. How you play is entirely up to you.
Posted by Kevin Markham at 12:56 PM