Who in their right mind would get up at 2.45am to be ready to play golf at 4am?

As I drove from Louisburgh to Wesport Golf Club, in the first drifts of rain, I was asking myself that very question. What the hell was I doing?

The Golfing Insomniacs event at Westport GC is celebrating its 20th year. That’s 20 years of people rising in the small hours to finish their round of golf in time for breakfast. There can be as many as 80 golfers roaming the fairways, giving late night revellers cause to believe that drink has affected their eyesight.

Read more »
Posted by Kevin Markham at 9:52 AM No comments:

We’re at the halfway stage of the 2013 Irish Open, so it seems an apt time to introduce five of the great courses to have hosted the Open in recent years. And there are some memories to go with them, from Shane Lowry prevailing against Robert Rock in the wind and rain, to Padraig lifting the trophy, to Richard Finch taking a dip in the River Maigue at Adare.

The following is written by Rory, a guest blogger.
Read more »
Posted by Kevin Markham at 11:06 AM No comments:

A few days back I blogged about a four day Irish golf tournament named The North West Open - it plays over four courses, including Ballyliffin.

It will see competitors driving past a course by the similarly named North West Golf Club. Set on the road into Buncrana, on Donegal's Inishowen Peninsula, this is one of the founding members of the Golfing Union of Ireland. The club dates back to 1891, and there is a sense of longevity and tradition about the place. There is a subtlety too, one that can only be borne by a classic old links like this.

Read more »
Posted by Kevin Markham at 10:17 PM No comments:

Tom Kennedy flew out to Ghana earlier this year on a contract that sees him take up the reins as Director of Golf in Ghana. It is a big move from Mount Juliet, where he was before, and a long way from his home of Limerick.

By all accounts he's having a great time, although, judging by the Sky Sports Reports recently aired, his name is causing a few problems... for Sky News at least!

Read more »
Posted by Kevin Markham at 11:16 AM No comments:

There are Open Weeks everywhere at the moment as the Irish golfing 'summer' tilts into full gear. Here are two that cropped up yesterday through very different channels:

Read more »
Posted by Kevin Markham at 9:28 AM No comments:

Irish Golf to the North - Part 1 - The North West Open 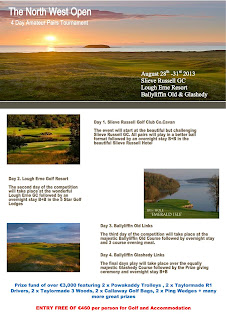 A few months back, Irish golf hosted the Social Media Open - a pairs tournament that saw some 40 golfers from Ireland, the UK and Sweden play over Mount Juliet, Castlemartyr, Adare and The Old Head of Kinsale. It was a big success with Tom Kennedy, the organiser (and now Director of Golf in Ghana), ending up with almost double the number of golfers expected. The organisation was impressive as were the prizes, due to the power and reach of social media.

In a similar vein, golfers can now participate in a pairs tournament that heads to the north of our golf course-laden isle from August 28 to August 31, 2013. If you want to play excellent courses and combine links with parkland, sign up for The North West Open and play Ballyliffin (both courses), Lough Erne and Slieve Russell.

Read more »
Posted by Kevin Markham at 7:58 AM No comments:

God has a sense of humour. Who knew! As 20 members of the Boards Society prepared to play Dunmurry Springs, he turned on the tap… then turned it off… then on. All day long he couldn’t help himself. Or maybe he was just sitting on the weather remote control while watching the Lions play the Wallabies in Brisbane.

Whatever it was, golfers everywhere were constantly caught unaware as rain raced in on the wind and sent us all scurrying for our waterproofs… which had been packed away only minutes before.

Read more »
Posted by Kevin Markham at 9:30 PM No comments:

An Invitation to Play Adare - Open Day and Inside the Ropes 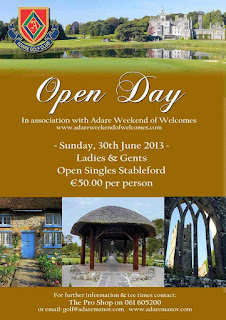 Adare Golf Club has offered me a fourball as part of my Inside The Ropes mission to introduce amateur golfers to some of Ireland’s best golf courses - and get their reviews.

This is the big, lazy Irish golf course that wraps around the Adare Manor Resort in Co. Limerick. Seriously, does it need any introduction! It has hosted the Irish Open, seen many of the biggest stars, such as Tiger Woods, walk its fairways and is regarded one of the very best courses on the island. It is also my favourite parkland.

Read more »
Posted by Kevin Markham at 9:25 PM No comments:

Is this the Best Book on Irish Links Golf?

You could have conversations - or arguments depending on how passionate you feel - about what constitutes a 'Best Book' on Irish golf.
Read more »
Posted by Kevin Markham at 8:56 AM 2 comments:

Golf Digest Ireland is running a series of 12 amateur events this year, with a prize fund of over €8,000 up for grabs. It is the ‘largest prize fund in Irish amateur golf’ and it’s packed with extras that will make most amateur golfers feel utterly spoilt… and you get to play over some of Ireland’s premier clubs, too.

On June 16th it was at Royal Dublin, and it was too good an opportunity to miss.
Read more »
Posted by Kevin Markham at 9:15 AM No comments: 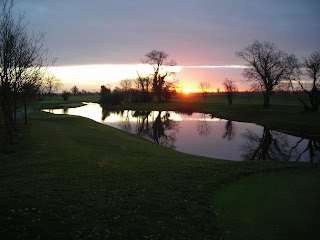 Roganstown Golf and Country Club are looking for a Sales and Marketing Manager. Only a mild coincidence that I played with a Roganstown member at Bunclody a week ago and my background is Marketing.

Roganstown is a resort-type affair with a hotel and a big Christy O'Connor designed course wrapped around it. The course is mostly flat, with water features galore and plenty of Christy's trademark mounding.

If you'd like more details, read on.
Read more »
Posted by Kevin Markham at 8:46 AM No comments:

A Bridge to Royal County Down

Last week the folks in Northern Ireland stumped up their portion of the cash to build a bridge from county Louth to county Down.


The scheme will provide a new single carriageway link between Omeath and Warrenpoint, connecting the R173 Omeath Road and the A2 dual carriageway across the Newry River at Narrow Water.

Why is this newsworthy on a golf blog?

Because it will make one of the world's greatest golf courses even easier to reach from Dublin. Royal County Down is roughly an hour and three quarters from Dublin, at the moment, but the bridge would side-step Newry and knock a healthy chunk of time off that 105 minutes... maybe 15 minutes, maybe more.


The length of the cable-stayed bridge will be 195 metres and it should/could be open as early as 2015.

Personally, I'd like to see it launched by Failte Ireland, with Rory McIlroy on one shore and Padraig Harrington on the other, driving balls across the Narrow Water... anytime one of the boys fails to carry the sea, a politician from the opposite shore has to jump in and swim across to the other side.

It would certainly capture the media's attention.


Posted by Kevin Markham at 4:15 PM No comments:

Inside The Ropes - Bunclody Golf Club

In 2012, Bunclody won the ‘Hidden Gem’ award in the annual ‘Golfer’s Guide to Ireland’ magazine. Quite a feat considering it only opened for play in 2009. Tucked away on the Wexford/Carlow border, the course stretches over 300 acres of an old estate. It is a wonderful golfing experience, from the moment you take the long, winding drive through tall trees and alongside the River Slaney, to the time you slip into a comfortable chair on the terrace after 18 holes.

And three golfers were about to find out how wonderful it is.

Email ThisBlogThis!Share to TwitterShare to FacebookShare to Pinterest
Labels: Bunclody Golf, Inside the ropes, Irish Golf

Congratulations to Declan Basquille on winning the tickets for the Irish Open. Four tickets and four days to choose from so I guess you could be really selfish, Declan, and go on your own each day!

Drop me a line and I'll arrange for tickets to head your way.

Thanks for all the entries - almost everybody got the right answers, which were:

GreenQ3. In 1990, which two players did Olazabal beat by three shots?

Mark Calcavecchia and Frank NobiloQ4. Who is the Touring Pro for Carton House?

Enjoy the Irish Open, and if you want to see that 'Greening in the Years' video again, with a blast of Thin Lizzy to clear the cobwebs, then just click here.

Champ - What Don't You Think About on A Golf Course?

Think about all the things you don't think about on the golf course...

... once you're out there you don't give much thought to the spikes on your shoes do you? As long as they're doing their job, why worry.

And what about tees? What about your pitch mark repairer?

Read more »
Posted by Kevin Markham at 3:37 PM No comments:

Silloth on Solway is a small town on Cumbria’s north west coastline, looking down the Solway Firth to the Isle of Man. It thrived as a Victorian seaside resort in the 1860s, and the wide, cobbled streets will take you back a generation or two. In those days, the town was connected to the world via a railway link to Carlisle, 20 miles to the east. Indeed, it was the North British Railway Company which founded the golf club in 1892 – an obvious extension to the company’s development of the town.

Read more »
Posted by Kevin Markham at 4:48 PM No comments:

The Irish Open... Win Tickets with Your Memories

It's that time of year in Irish Golf, when we get to watch many of Europe's best golfers - and the odd American - compete on our shores. The Irish Open may have had its financial struggles in recent years, but it has made the cut... and so it should. It is a showcase for our country and our golfers, and while the weather doesn't always play ball, there is plenty to enjoy. Did the weather matter one bit as we watched Shane Lowry defeat the rain and Robert Rock to collect the trophy in 2009? No, and it's still a buzz to think that we have four Irish golfers who are Major champions. Seeing these guys in person and up close may be all it takes to bring young kids into the fold.