There is a constant string of news about the Irish Open being held in Ballyliffin next week. That's no surprise as it's a not only a huge event for the European Tour (their $7 million Rolex Series), it's also a massive occasion in Donegal, where Ballyliffin's General Manager, John Farren, compared it to hosting the World Cup. Here's the latest press release... which provides a perfect opportunity to show off the Glashedy Links in photographs.

Read more »
Posted by Kevin Markham at 5:34 PM No comments:

Miracles at Belmullet - Carnage and Celebration at Carne, Part 2

Here is Part 2 of Mike Considine's Carne story (You can read Part 1, here).


But then, in a moment, as often occurs in golf, something happened.  Things changed.  It was a moment that would define the weekend.

After five perfect holes, on the 6th tee, Finian slightly pulled another prodigious drive. But this time, the wind carried his ball perilously close to the out-of-bounds marker on the left side of the fairway. [which is no longer there, Ed.]  We thought there was a good chance that his ball stayed in bounds. Finian then proceeded to hit a provisional drive which proved a dead pull hook about 100 yards left of his first.  Out of bounds.  We grimaced. Then he hit

Read more »
Posted by Kevin Markham at 3:01 PM No comments:

Miracles at Belmullet - Carnage and Celebration at Carne

As the Atlantic Coast Challenge draws near (9-11 July) it's time to post a wonderful tale of golf that was emailed to me by American, Mike Considine. Mike has some special memories of playing in Ireland and playing at Carne in particular. As you'll deduce from the opening sentence, Mike and his friends met the South African golfer, Wayne Westner, in Belmullet. Here is Part 1:
The recent passing of the South African golfer Wayne Westner prompted a search of dusty boxes containing materials from old Irish golf tours.  I was looking for a particular file.  The year was 2000, and, in our new springtime tradition, I and a few college friends were preparing for a golfing trip to Ireland, the Green Isle.  Unlike many links purists, we had not included Scotland on our itinerary.  Scotland was never our focus.  With a nod perhaps to our Irish heritage, our group's links lust centered on the courses introduced to the world by the siren call of Herbert Warren Wind in Sports Illustrated, and the stirring prose of Irish writer Dermot Gilleece. Ballybunion, Lahinch, Waterville and regal Royal County Down -- these were the courses that lit our imagination.  My very first round of Irish golf had been at Ballybunion Old in 1987, where I was greeted in the unassuming clubhouse by a friendly dog, and escorted around the course by an affable caddy named Eric Glasper.  The modest old clubhouse, now replaced by an imposing edifice, featured a large wall

Read more »
Posted by Kevin Markham at 10:43 AM No comments: 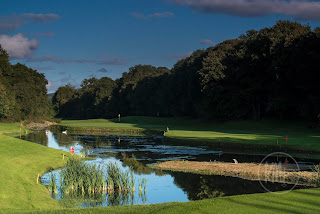 It’s not often you’ll find two hotels in one resort… but then again, it’s not often you’ll find somewhere as astoundingly beautiful as Mount Juliet.
Hunter’s Yard is a ‘new’ four star hotel of modern flourishes and calm sophistication. It will complement the five star luxury of Mount Juliet House, perfectly. The distance between them is a few hundred metres but Hunter’s Yard is right next to the new clubhouse and golf course. It surrounds the old courtyard and is a combination of renovation and inspiration. If you remember the leisure centre or the
Read more »
Posted by Kevin Markham at 8:34 AM No comments:

The more the merrier, I say. It is excellent news for Irish golf that we continue to focus on our younger golfers and, alongside training camps during the Easter and summer holidays, various competitions and Get into Golf type programmes, there are efforts to give kids a competitive environment in which to challenge themselves, enhance their skills and make new friends.  It’s all part and parcel of helping these kids fall in love with the game. If we can generate that kind of passion and commitment early on, then we will see many of them playing golf for decades... and that's
Read more »
Posted by Kevin Markham at 10:50 PM No comments:

I have now played the Media Day at Carton House, three years in a row. The weather has been erratic and gone as follows:

It's hard to believe that two courses so close together can be so different but it does mean visitors have considerable choice and variety. That said, the Montgomerie is a tough course and you don't need

Read more »
Posted by Kevin Markham at 10:27 AM No comments:

It’s never easy picking an ‘18 best holes’ selection… or the top 100 courses for that matter. There are so many factors involved and it’s a real scrum when it comes to pulling out the final 18.
Co. Kerry is a perfect example of this. I mean, Ballybunion, Tralee and Waterville are three links rated in the top 100 courses in the world, so how do you choose holes from anywhere else? And yet there’s Dooks, Killarney’s two courses, Ceann Sibeal and Hog’s Head to add to the mix.
Fortunately, the Irish Examiner gave me the opportunity to produce two 18s: the overall
Read more »
Posted by Kevin Markham at 8:21 AM No comments: