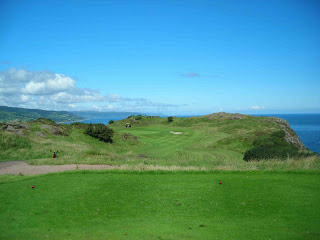 [The par three 2nd sits on top of the headland]

I always love it when a golf experience begins before you arrive. The drive along the Antrim coastline puts you right on top of the sea, and if you’re coming from Larne then the golf course appears on the headland in the distance. You’re reaction is: “no, it can’t be!” But it is. Those are golf holes up there. In fact that’s 1, 4 and 5 you can see. The best of all, the par three 2nd, is at the very top where you can’t see – but when you get up there you’ll want to have your camera with you.

For many, a buggy might be the order of the day. In the pro shop, the elderly gentleman in front of me asked for a buggy for 9. Brian, behind the counter, shook his head: ‘you won’t fit 9 in a buggy,’ he quipped.

Cairndhu boasts the best views in Ireland. Having played nearly all of its 350 golf courses I would dispute that, but that doesn’t mean you won’t love them and won’t be overwhelmed by them. Indeed, you’ll need to stop a couple of times on the way up 1 (and 3) just 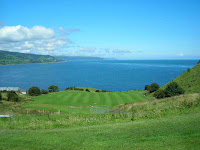 to appreciate them – and catch your breath. It's also worth noting that their driving range must offer the most awe-inspiring drives - see photo.

It is a spectacular start, and even when you get onto the ‘regular’ parkland holes on the back 9, the views just keep cropping up. For me, one of the highlights is Ailsa Craig, rising over 1,000 feet dome-like off the Scottish coast. It rose to ever greater heights of fame back in 1992, when the Scottish Women’s Curling Team won the curling gold medal at the Winter 2002 Olympics, using curling stones honed from Ailsa Craig rock. Sadly, on Cairndhu’s 18th, called Ailsa, the trees have grown up so high behind the hole that Ailsa Craig is barely visible. Then again, there’s more than enough to see, and the golf is excellent. 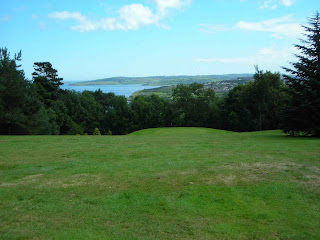 [The approach to the very difficult par four 15th. This approach is blind]

One final point: as I drove along the road a big brown sign appeared for Carnfunnock Country Park. On the sign was a golf flag, so up the road I went only to be stopped by a barrier. No, this was not the place, and the girl in the small booth said that a lot of visiting golfers get it wrong. So keep going for another few hundred yards until you find a sign that says ‘Cairndhu Golf Club’.
Posted by Kevin Markham at 7:09 PM