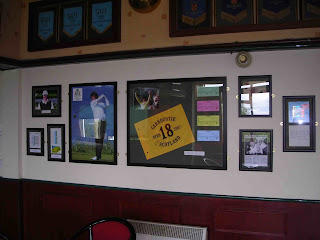 In the Holywood bar I thought I had become very popular. I was sitting at a small table, typing up my review for Royal Belfast, when a group of people came towards me. Not surprisingly, I wasn’t the attraction and they didn’t give me a second glance. I was sitting under the Rory McIlroy wall of fame. His scorecards from the 2007 British Open were on the wall with a signed flag from the 18th. Other pictures adorned the wall along with cards showing course records he had broken at Clandeboye in June 07 – a seven under par 64 – and at Royal Portrush in July 05 – an astounding 11 under par 61, including 5 consecutive birdies to finish.

I then encountered Susie, a Slovakian blonde (and yes, every bit as gorgeous as that sounds) who had been working in the Clandeboye bar the night before. The same catering company looks after both golf clubs. We chatted briefly and Rory McIlroy got mentioned. She laughed and told me that Rory’s dad was her boss and it was he who I had paid for my dinner the previous night. I discovered later that Rory had been in Holywood that afternoon and had been sitting next door in the members’ bar. 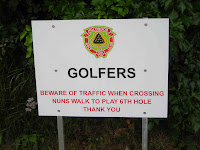 As I walked towards the 6th hole, a delicious drop shot of a par three that sits completely separately over the lane, I was stopped dead in my tracks by a sign just before the road. Have a look at the pic and see how gloriously ambiguous it is.

Nuns Walk is the name of the lane and the hole, but it all depends on how you read it. There’s even an identical sign on the way back, crossing over to 7.

Holywood is hilly, and while the start is slow (no climbs involved), it’s not until you start climbing from the 8th green that you sense something big is coming. When you get to the 10th green you will encounter a strong run of holes that have the best views and make Holywood worthwhile. 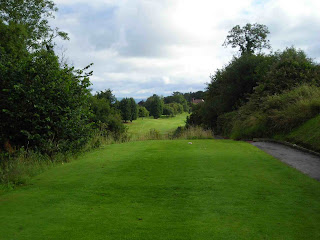 [Photo: the par 4 14th. The best hole and somewhat different to the rest]


Like Royal Belfast, some directions would really help. As Rory’s home course there are going to be many golfers in the years ahead who will want to come here.
Posted by Kevin Markham at 9:33 AM