A few years ago I spent a few days in the Golf Hotel in Nairn. It’s a town in the Scottish Highlands, an hour to the east of Inverness. The hotel sits right beside the highly rated Nairn Golf Club. Not surprisingly, given its name and location, tasteful photographs of golf holes adorned the hotel walls. I counted maybe a dozen or so clubs from the region.
Now, sitting in the bar of the Royal Marine Hotel in Brora, I am surrounded by paintings of three-masted ships dashing through the waves. And in much the same way that my non-golfing friends look at a photo of a golf course and say ‘yea, it’s another golf hole’, all these ships look the same to me. 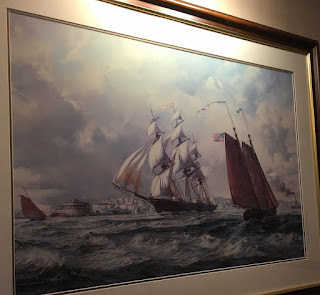 The hotel has that old school feel to it. It was once a private residence so it avoids those sharp cut lines and ubiquitous hotel lobbies. What it does have is a lot of what I like in a hotel. It’s dark, but not gloomy; it’s peaceful but not quiet; and it’s friendly but not intrusive. And the food is very good. Far better than you’d expect. There's also the 'James Braid' room, full of memorabilia, and a wood-panelled room next door with a snooker table. I’ll be sorry to leave, but today was my last day in Brora, and that meant playing at Brora Golf Club, which is less than a minute’s walk from the hotel. (The hotel does special golf packages and even has dedicated golf apartments.)
Brora will celebrate its 125th anniversary next year. The full 18 holes were designed by James Braid in 1923… and very little has changed since he took a train trip north in the morning, 124 years ago, walked the land, and then took the return train home that evening. Two weeks later a set of plans arrived in Brora, detailing the course layout… see photo below.
And that is pretty much how it has remained for well over a century. It is often discussed as one of the top UK golf courses and a foil to the mighty Royal Dornoch down the road. What it is, is natural, flowing, enigmatic at times, always fun and constantly entertaining. And then there are the greens. Everywhere I have been so far, golfers whisper about the quality of the greens at Brora. They did not lie. These are as perfect a putting surface as I have ever played on. They may have made a fool of me today, but that doesn’t detract from their brilliance.

My partners for the day were Tony Gill (the club Secretary) and Andy Simpson, from up the way in Wick. Andy is a member of the Golf Club Atlas forum, which is how we ended up chatting. He has provided a lot of advice on where to go on this trip, and the Royal Marine was one of his suggestions.
Brora rolls over medium sized dunes, with the opening 9 holes mostly hugging the coastline. The sea is visible from everywhere and even when you drop down into the countless dips and hollows, the sounds of the waves are always there. Blindish shots appear frequently, with market posts pointing the way… and if you don’t pay attention to those posts, you may well end up with another blind shot to the green.

As Tony pointed out, with sheep and cattle grazing the land (low electric fences protect greens) the rough is kept low.

“You’re very unlikely to lose a golf ball,” he assured me. I didn’t, although I did try.

Balls will slide off greens if you don’t appreciate the types of shots to play, the best side of the fairway to be on, and the pin position. On the par three 6th, named ‘Witch’, I was off the green to the right. I chipped up to the flag, in the middle of the green, only to see it catch the slope and take a sharp turn left. I ended up 15 yards off the front of the green.

It was only after my double bogey was written on the card that I remembered Alec’s words from Golspie yesterday. ‘It’s called Witch, but that's not what I call it… although it does rhyme with witch.’

Tony puts it inside 10 feet at the par three 13th, called Snake.

There is constant movement to the fairways. Perhaps only the 15th has a flat fairway, because elsewhere you may find the ball on any angle of slope. And if you don’t use GPS/Laser thingies then you’re in for a treat as there are no fairway markers or posts whatsoever. You have to do it all by eye.

I did manage one feat that Tony had never seen before: I drove the green on the 500 yard par five 8th. The wind was coming down the hole which was quite a help but even so it was some shot. Especially since I was teeing off on the 10th at the time.
Would I go back to Brora? In a heartbeat. There is something about the very spirit of the game running through this course, through the dunes and fairways, and through the magnificent greens. You may hit far longer than the golfers of yesteryear but, even so, you suspect that some of the shots you will play are very much of the style and purpose of those who played here for decades before you.

My thanks to Tony and Andy for the company. And to Simon who made up the imaginary fourth. A huge thanks also to the four greenkeepers who can produce this kind of quality in late October.

Weather Report:
Dull start, but the sun came out after nine, which meant we had the sun in our eyes almost all the way back. Wind picked up a head of steam, too. Had to hit my driver on the 200 yard closing hole
Golf Report:

The Scottish Highlands and the North Coast 500 take me on a wilder adventure from tomorrow, as I head farther north to Helmsdale and Lybster.
Posted by Kevin Markham at 10:23 PM