How often have you been told something is ‘amazing’, only to experience it for yourself and be left disappointed? Happens all the time, right, whether it’s a restaurant, a movie or a golf course.


Not today. Royal Dornoch, my friends, is the experience of a
lifetime. From the pink sunrise that accompanied my journey from Tain, to the welcome in the clubhouse (thank you, Sean) to the walk onto the 3rd tee, when the ‘floor’ of the course opens below you, and you get to see so much of Royal Dornoch’s splendour.

I confess to being nervous on the 1st tee. When you play one of the ‘Top 10’ courses in the world, you become all arms and legs. I tried not to remember the fresh air on Royal County Down’s 1st tee, many years ago, with several people watching. At Dornoch, I had the advantage that no one was around to watch. I hit the ball fine but still lost it in the rough. And then three-putted the green. I'd been told how big, fast and treacherous the greens were, but they are beautiful creations, too. Enjoy that three-putt - if you don't get it close you could have over 30 yards of green to cover.


Apart from a two ball in front of me, I didn’t see another golfer until the 11th hole… and they were playing the 6th. On a day this good, on a course this exceptional, how lucky is that! I couldn’t have asked for more as I spent four hours lapping up the course and taking photographs. Every hole stopped me in my tracks; every tee, every approach, every green demanded my attention and begged to be photographed. And, after my two and a half hour round at Tain yesterday, my four hour round at Royal Dornoch was a leisurely stroll.
I have Ru MacDonald to thank for the weather. I was due to play Royal Dornoch tomorrow (Wednesday), but Ru contacted me yesterday to say that Tuesday’s weather was looking really good. And it was. It was the perfect links weather, which was only fitting given the golf course.

After lunch, I met Ru at the clubhouse and we set off to play the club’s second course – the Struie. It’s not in the same league as the Championship course, but the conditioning is still superb, the greens magical and the views endless – many of them of the village and cathedral.

Ru is a passionate Scottish golfer and so very very young. He runs a successful weekly golf podcast, called ScottishGolfPodcast (click link for iTunes), which has a loyal and growing audience. But he’s full of ideas for how golf clubs, and Scottish golf in general, can attract more visitors to the country and build in ‘loyalty’. I guess, in a way, we’re competitors. He wants to attract golfers to Scotland, in much the same way that I do to Ireland. Then again, we both want to build and expand the game as much as possible. We parted ways on the 7th tee (I was 4 up I think) as he had a previous appointment, but we met again later in the clubhouse and continued the conversation. There are some new courses planned for Scotland, and Ru has his ear to the ground.

Perhaps one of the most rewarding comments he made was how Royal Dornoch cherishes the environment over which the courses are laid, and how they embrace the flora and fauna all around. Such responsibilities are not taken lightly, nor should they be… just look at the furore over Trump’s Aberdeen course.
Royal Dornoch is exceptional. Any golfer should aspire to play here… and a special mention has to be made for the relaxed atmosphere in the clubhouse, the welcome of the staff and the quality of the food. It’s the best ‘clubhouse’ food I’ve ever eaten. It combines traditional golfer’s grub with the higher end range. 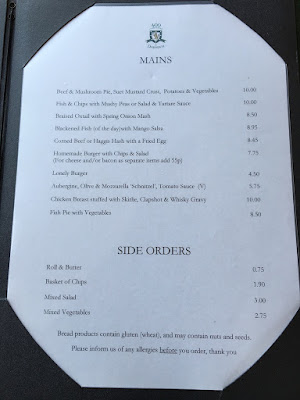 Weather Report:
Heaven.
Golf Report:
Heaven. Golf was never going to be as good as yesterday - a triple on the 1st didn't help - but keeping the ball in play and using a variety of shots around the greens kept things interesting. Shows how subtle Royal Dornoch is. Lost my first ball of the trip.

One final note: a path snakes its way between the golf course and the beach, right alongside. It's a public footpath, so be aware that a head might pop up from time to time, and a hooked shot should be accompanied by 'Fore'. This is especially on 9, 10 and 11. And keep an eye out for dolphins.