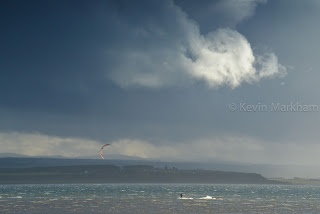 Scotland Day 3 is a wash-out. Not entirely unpredictable, but very disappointing nonetheless. The rain was pounding down long before breakfast and, despite being indoors, I got a sample of it when Hector, the owner’s brown lab, came in for a morning ‘hello’. It mattered little, I’d be soaked soon enough.

Or not, as the case may be. Torvean Golf Club, on the south west suburbs of
Inverness, was swamped. Unplayable. Water was sitting everywhere. The best I could do was walk this simply designed course. There’s no fuss to the place, but several holes wrap around a wooded hillside and it’s a fun and unassuming place.

I was done by 10am and since my next tee time wasn’t until 2pm (at Inverness Golf Club), a trip to Fort George seemed like a viable option. An 18th century military fort, just 10 miles to the east of Inverness, it remains occupied by a Scottish regiment. Makes it interesting for tourists, I’m sure, plus its position opposite Fortrose & Rosemarkie, across the Moray Firth, means dolphins may well appear during your visit.

But I never made it. The road to the fort passed right by Inverness Golf Club, and there were only 6 cars in the car park. Why not? I thought. Maybe I’ll get my round of golf in here. Sadly, no, the course was closed. The rain was still pummelling down and the course was closed for the day. So it was another walk around a golf course: umbrella in one hand, camera in the other.

Inverness GC is an altogether more serious affair than Torvean. A simple start soon finds its legs as the course ripples over an undulating landscape that seems at odds with its suburban surroundings. Trees provide the main structure and you’ll not be too surprised at how often they cause chaos. Greens are simple, subtle creations… and by no means easy.

I ended up in the bar for lunch, talking to David, the Assistant Pro, and Eric and Alan, two members. It proved interesting as I heard much about the local courses - especially about the size of the greens at Royal Dornoch. Since I can usually three putt from inside 10 feet, that doesn’t bode well.
The sun arrived but the course remained close, and so I left, once again heading to Fort George.

And again I failed… as it just so happens that the road to the fort passes Castle Stuart. With the sun out, surely a quick drive in wouldn’t hurt. I asked about the new Arnold Palmer course (work starts next April) and was told Castle Stuart (the actual castle of 1625) would be visible on 14 of the holes. Then I went out and took some photographs. (Thank you Sean, an extremely accommodating guy.)

The fort was only a few more miles along the coast but this time three kite surfers drew my attention and I got the camera out as they tore across the waves, enjoying the high winds. 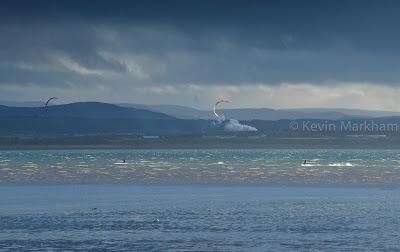 So, by the time I made it to Fort George, the place had closed, but it had been an entertaining journey to get there..
Posted by Kevin Markham at 11:06 PM