I drove down the lane to Dunrobin Castle, a half mile to the north of Golspie. It was closed for the season – something I had been told in fairly bald terms when I’d phoned up a week ago – but the gates were open and that’s as good as an invitation, right!

The drive descends through tall trees, the sunlight slicing the road into shreds
of light and dark. At the end I parked beside a car with a glass of red wine sitting on top. A young woman climbed out and approached me. She was looking for a light and she was French. I popped in the car’s cigarette lighter and we chatted about the castle being closed. She introduced herself as Marie.

Who Wants to Work in Venice?

A man then burst out of the trees and trotted towards us, taking a brief detour to the glass of wine. He took a mouthful and approached. The cigarette lighter popped and Marie lit her roll up as I asked what had brought them to Golspie in a battered old English reg Ford.


They lived in Elgin, he said, but he worked in Venice. I pondered that one for a moment, not seeing how that had anything to do with the Ford. It sure as hell was a long drive to work.
Marie handed the lighter back to me and they returned to their car.


It was only a little while later, as I drove up into the mountains that I realised he didn’t work in Venice. He worked in Inverness.

Today’s golf was at Golspie, a very well known James Braid course. There is nothing sweeter than standing on a 1st tee of a highly regarded course, with only the sounds of the waves crashing on the beach and not another vehicle in the car park. My own personal golf course. I could get used to that.


Jeanette had a big welcome for me and chatted about the club and the course. It’s had some serious sea assaults over the years and she warned me about the 4th, and then showed me the photographs of the damage on the back of the shop door. The rocks strewn across greens and fairways reminded me of the damage to Mulranny last year.
“There are three courses here,” she informed me. I’d heard that before and I took note as she ran through the order of things – especially how to play the 4th (a very tough par five where your final approach is blind, and the green is right up against the beach). Golspie is known for mixing links with heathland with parkland. That sounds like it shouldn’t work… but it does and it is thoroughly entertaining. Tricky too as there are some hidden hollows, some very bumpy fairways, deep bunkers and greens often tucked behind a ridge. It’s craft you need here… patience and craft. And that’s what makes it so rewarding.

I headed out on a dull grey morning, but no rain so who’s complaining. As I prepared to tee off on the 3rd hole, pressed up against the ocean, a fourball cut across me… OK, not a fourball exactly, but four elderly women walking a menagerie of dogs which were running over the dunes, onto the beach and onto the course. Walkers and golfers must collide here a bit as 3, 4 and 5 hug the beach.


“Och, would you hit the ball before the dogs see ye,” one of them yelled, “else they’ll be after it and ye’ll never get it back.” And yes, she really said ‘Och’ as she waved her crutch at me.

I got on with it as instructed.
After the par three 6th, the 288 par four give-it-a-lash 7th heads up over a high ridge to the heathland holes. The fairways maintain that bumpiness but with a springier turf, and holes 10 and 11 are beauties at the farthest point of the course. Where the parkland begins is… well… holes 14 and 15 are parkland-ish, but I don’t know that they’re worthy of separation. I think I’d leave it as links and heathland, with a couple of tame holes on the top section. The long par four 15 th drops down to the links ground again, and then you have back-to-back par threes on 16 and 17. And they’re beasts.
I met Alec MacDonald, the head greenkeeper on the 16th tee, where he was waiting with two ladies who had cut across from the 6th. No dogs this time, just golf clubs. Turns out one of them (Alison Cameron) is the editor of The Northern Times, the local Sutherland area newspaper, and today’s headline reads as follows: Sutherland teed up for ‘world class’ golf course.

Alec is from serious golfing stock. He’s Golspie’s head greenkeeper, his bother is a greenkeeper at Royal Dornoch… and his other brother is a greenkeeper at Fota Island. Golf runs in the blood it would seem. Oh, and it was his aunt who greeted me in the clubhouse… and her husband was also a greenkeeper. After that I get confused. But he’s no fan of what Trump has done at Aberdeen, and on that point we agreed. Would the new Sutherland course, under Michael Keiser’s development, follow the same bully-boy approach where money was thrown around willy-nilly. It seems unlikely as the dunes system is a Special Protected Area (SPA). Hold on, this sounds familiar. Seriously, I don’t see this going the same way as Trump at all. Read the article here.
While we were chatting, another lone golfer came by, a lady by the name of Beth. To celebrate her 50th year Beth decided to play 50 of Scotland’s ‘gems’… get it… she got gems for her 50th birthday. Of the 50, 25 are James Braid designs… which was why she was at Golspie. If you want to take a look at what she’s up to, her blog is www.LadyOfTheLinks.co.uk. So, at one stage that morning, there were only two golfers on the course and both of them bloggers.

The food in Golspie village did not come highly recommended, but Jeanette said I’d get a good bowl of soup at the Coffee Bothy. “It doesn’t look like much from the outside,” she said. 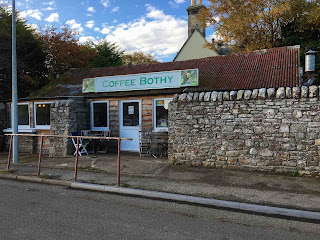 But inside it was quaint and the sweet potato soup was excellent. It came with bread and butter… but no knife. Bless them for thinking of my waistline as I left the butter where it was. I then ordered the fudge cheesecake. Equally delicious, and the place is well worth a stop.

And speaking of waistlines, I can now get my belt buckle to the fourth loop. It hasn’t been there for a number of years, that’s for sure.

Weather Report:
Dull grey day. Sun popped out as I walked off 18… so I went back and took some photos.
Golf Report:
Made par on the Index 1 and didn’t lose a ball… that’s about as good as it got. You need a good head and a good short game round here.
And finally, there's a practice area across the road. Quite possibly the most fun you'll ever have. 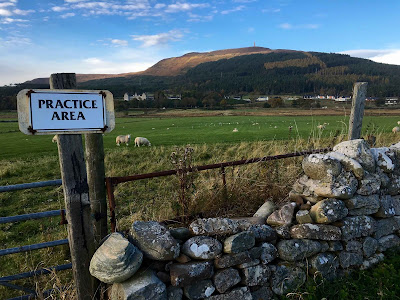 Golspie Golf Club is one of the big three on this stretch of North Coast 500 coastline (I play Brora tomorrow) and it really is a must-play Scottish Highlands golf course. It is such an enjoyable round of golf. And it's cheap-as-chips to join.