Today was a non-golfing day to catch up with a bit of culture and history in this part of the world. And when I say ‘culture’ I actually mean ‘whisky’.

The Balblair Distillery came highly recommended by someone who knows the area… and whisky, evidently. This is the oldest distillery in the country. True, there are four distilleries that all claim to be the oldest, but Balblair is the one that has proof of distilling in 1790. They also have paperwork from 1715 for an order of copper used in the distilling
process.

But age matters little – sort of – what matters is the quality of the whisky today. Balblair is small in the grand scheme of things: they can produce 1.8 million litres* of whisky a year… compared to the nearby Glenmorangie’s 6 million. But small is beautiful, right! The company was the first to use the year the malt whisky was distilled… and not an age. So, rather than a 12 year old whisky, you’re buying a 2003 whisky. Clever, precise and means the whisky is immediately identifiable. The other distilleries weren’t happy apparently. They were just sore losers, because 2003 has so much more history and desirability than a ’12 year old Scotch’.

I took the tour, with New Zealander Gabrielle, in charge. It was an entertaining tour, with three samples at the end (1990, 1999, 2003)… plus another sample outside from the ‘special’ 1997 cask, when you can pour, label and personalise your own unique bottle. It’s a clever touch. As is the idea to reproduce the warehouse scene from the movie ‘The Angels’ Share’, which was filmed here in 2011.
I don’t drink much whisky, and buying a bottle would seem extravagant, but what I tasted was delicious. I still have two of the three samples, just in case it gets cold up north.

Little known fact… per head of population, which country consumes the most whisky in the world? France.

* And of that 1.8 million, Balblair only keep 15% for themselves. The rest is used in blended brands. 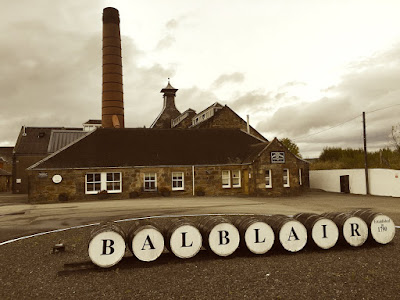 Do you have any idea how difficult it is to type ‘whisky’ and to leave out the ‘e’. It’s whiskey, boy… the ‘e’ stands for everything.

When I said it was a non-golfing day that was my original intention. Bonar Bridge Golf Club, however, is not far from the distillery and it came highly recommended (just like the whisky). So I headed over to play this nine hole heathland course. It’s another club (like Tarbat) with a lone greenkeeper, and it’s impressive to see what one person can do.

Here, the first five holes are outside the wood, flowing over bumpy, heather-strewn terrain with some quiet rural views; after that, there are three holes channelled in a triangle, enshrined by trees with wild rough running through them. The last hole mixes the two. As elsewhere, the conditioning is not top-notch, but I’m rapidly beginning to appreciate these courses for the enjoyment and simplicity they offer. We’re too spoiled at home, expecting everything to be perfect. It simply doesn’t need to be.


Tomorrow, I leave Tain after a very enjoyable 4-night stay at the Morangie B&B. I play at the Carnegie Club, at Skibo Castle, in the morning, and that should be a very different Scottish Highlands experience.