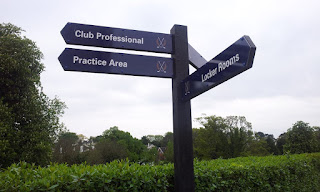 Last Sunday, it was the semi-final of our golf club's annual Father & Son tournament. Dad and I were up against a pairing we lost to three years ago. Playing off 9 and 4 they were a formidable and knowledgeable team. So, when the father started brushing away a few grains of sand with his putter on the 3rd green I was surprised. Penalty, right!

But, as we well know, some of the rules of
golf are ridiculous. A ball moves at address... so what! Put it back and continue. How is the golfer benefitting exactly! Same as brushing sand off the line of a putt. What actual advantage is the player getting? Testing the speed of the green, my arse!

I didn't make any comment and they won the hole.

And that leads to an interesting dilemma: would you call the penalty and claim the hole, risking a frosty atmosphere for the rest of the round, or would you let it go and maybe let the fact that you didn't at least make a comment niggle you for a few holes.

There's another factor involved, too.

I played with a friend yesterday and we were discussing the Solheim Cup controversy - he said he had called a penalty on an opponent once and, as a result, had found that his own game deteriorated badly for several holes. It's a guilt thing, I guess, but one I'm sure many of you can relate to.

I wouldn't know because I've never had the balls to call someone on it. Not even in the semi-final of the Metropolitan Cup a few years ago, against Beaverstown, when my opponent was in the trees hacking down branches before playing his shot. (Incidentally, Paul Dunne was playing for us that day. Not one opponent in the whole event took him past the 14th hole.) I lost the match when the scores were tied at 4-4 and we missed out on the final.

So, not only do you risk antagonising your opponent you risk upsetting yourself. 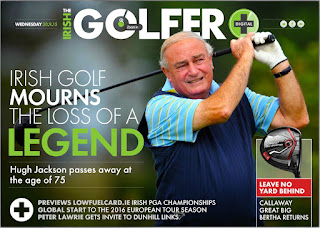 And that's why I admire Suzann Pettersen so much. She called a penalty against Lee which she was perfectly entitled to do... especially as it could have materially affected the outcome of the hole. I've written an article for Irish Golfer Digital+, on page 10, about my thoughts on the Solheim Cup incident. It's an edited version. The article in its entirety is below. The weekly online mag includes an interview with GMac (by Bernie McGuire) and his thoughts on the incident.

When Agnetha Fältskog, Abba’s blonde bombshell, belted out the words to that 1979 hit, little did she know how it would be applied to her Scandinavian counterpart 36 years later. The 2015 Solheim Cup will, sadly, be remembered for Norwegian Suzann Pettersen’s reaction to events on the 17th green at St Leon-Rot Golf Club in Germany… and not the golf that was played over the three days.

Controversial it may have been but amateur golfers can learn important lessons from what happened.
Everyone on that 17th green made mistakes yet it is Pettersen who has been vilified – Laura Davies take a bow, your vitriolic performance is perfectly suited to Sky Sports. With so many people moving around and so much noise there may have been some confusion, but for Lee to assume (or claim) that the putt had been conceded was idiotic. In what was such a tight match an 18 inch to two foot putt is never an automatic ‘gimme’.

And that leaves Suzann. The fact that the putt might or might not have been a gimme has been lost in how the hole was claimed. It was not, many are eager to point out, in the spirit of the tournament. That’s easy to say and a classic safety net to fall back on but, as anyone who has been in a matchplay situation knows, it is rarely as simple as that. Remove the crowds, the cameras and everything else and put that moment into context. In fact, learn from it.

When your opponent putts and leaves the ball at that tantalising distance, you have a few seconds to decide whether you’ll make them putt it or not. When that decision is taken away from you because your opponent erroneously picks up the ball, you then have a split second to let it go or call them on their mistake. That is a player’s right… and an opponent’s forfeit. To say that it is not in the ‘spirit of the game’ is disingenuous because that spirit left the Ryder and Solheim Cups a considerable time ago. For sure, there are still exhibitions of great sportsmanship within the events, but there is now a level of rivalry, almost antagonism, between the teams that pushes players to make every shot count – which is as it should be.

Suzann took that split second decision and did what she thought was best for her team. Whether you like it or not, that was her right and, quite frankly, I would have liked to see the Americans face that putt, too. Gimme, it may have appeared but… all square, 17th hole… it wasn’t that simple.

The alternative is that she lets the Americans get away with a really basic mistake. Yes, there were opportunities to rectify the situation (see Rule 2-4 and 2-4/3 of the Rules of Golf) but her subsequent apology only muddied the waters. It’s a very professional/celebrity thing nowadays… wrong or right, if you’re seen as doing something controversial you have to apologise for it afterwards. Sadly, it won’t save her in the US, where she can expect to be abused by galleries for a long time to come.

And for those people who have come out to say that gimmes should be scratched in matchplay for the sake of the game and sportsmanship… are you mad! First, define a gimme – is it 18 inches, or 20, or 21? Second, who carries a measuring tape in their golf bag? And third, how nervous have you been standing over a 12 inch putt when your best score is on the line, when you have a chance to win a major match for your team/club or you’re looking at your first ever eagle.

Who was it who said that 90% of golf was played between the ears? Not Agnetha: she was too busy singing Abba’s next track – The Winner Takes It All.