The North Coast 500 is a coastline route wrapped around the Scottish Highlands. Stretching from Inverness, on the Moray Firth, up to John O’ Groats, then west to Durness and finally south to Applecross, this is Scotland’s equivalent of Route 66… and, quite probably, the Wild Atlantic Way. It is called the North Coast 500 route and, surprise, surprise, it is 500 miles long. 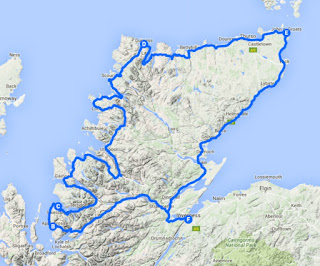 Wildly scenic and forever battered by the Atlantic Ocean, this is as far north as the mainland goes. Sea stacks rise from the ocean, beaches slice into the coastline and history is built on the inhospitable environment that leads to a hard way of
life.

Why am I telling you this? Because the North Coast 500 has one key attribute that draws the likes of you and me. It has 25 golf courses along its route… among them four of the best in the British Isles, and, in Royal Dornoch, one of the top courses in the world.

And still you ask… why am I telling you this? Because over the next three weeks I will be driving this route, playing every golf course and trying to discover what makes these courses so great, what separates Irish links golf courses from their Scottish counterparts, and, most importantly, why Scotch whisky decided to leave out the ‘e’. My geography teacher once told me that the ‘e’ in Irish whiskey stood for ‘everything’, and some taste comparisons will tell me just how true that might be. The acclaimed Glenmorangie distillery is practically next door to Royal Dornoch. Coincidence? Unlikely.
This blog will be updated regularly in the coming weeks on what Highland Scottish golf is all about but... for now... it’s about trying to figure out exactly what to bring on the journey. After all, there are so many elements to consider. What will the weather do? (Lots of rain, obviously, but temperatures should remain between 8 and 12 degrees.) What’s the most appropriate gear to bring? (or should I ask, how many sets of waterproofs and golf shoes are sufficient?) How many balls will I need/lose? What, precisely, is haggis?

The 1989 camper van that served me so well on my Irish travels has long gone. Now it’s me and a car and a long road over some of Scotland’s most dramatic coastline and across some truly hallowed fairways.

Posted by Kevin Markham at 2:52 PM