An early morning start, back out on the beautiful Brora Links. The morning was due to be glorious and I had failed to get the necessary photographs yesterday… so, come sunrise, I found myself walking the course with an elderly lady and her very enthusiastic King Charles spaniel. The lady was striding along… the dog either running alongside or flying through the air if it failed to keep up.

Watching the light and shadow form over the fairways and through the hollows is always one of the joys of photography, and being on one of the best courses in the country just adds to the occasion.

Here are a couple of shots (above and below).

The road north led to Helmsdale, the site of the next golf course on the North Coast 500 route. The sun was out so how bad could it be … hmmm … after being spoiled in recent days, Helmsdale was a definite drop in momentum. There was no one at the clubhouse – I was told in the village that the course was probably closed on Sunday – and the nine-hole course was deserted. Can you imagine a course at home being empty on a sunny Sunday morning? 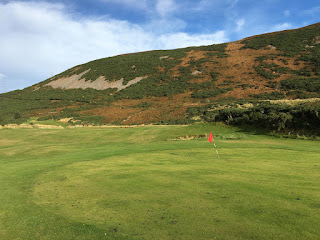 I made my way around the course and admired the views. There’s not much more to be said than that. Helmsdale Golf Club is not designed for golfers from abroad.

Lybster Golf Club was next, along the coast road that rose and fell like a heartbeat. It was mountains to the left, ocean to the right, the two seemingly joined by the white ribbon of waves. In Lybster, another small town,  the Waterlines Museum introduces you to the history of this fishing community and the harbour over which the museum sits.
The golf course at Lybster is nothing to write home about. I walked into the clubhouse and chatted with three of the members. They waved me on my way and I discovered a course that had been described to me as sitting in an area 600 yards long and 200 yards wide... which is exactly what it was. There are nine holes here, squeezed in on a gentle hillside overlooking the sea. As at Helmsdale, it will not attract touring golfers, but is sufficient for the local population.

It does have one interesting quirk, however... the par three 4th may be the only par three in existence that deceives you... by placing a green directly in your line. Stand on the tee and you will see a flag over some heather. But that's not your green (it's the 6th). The green you want is 40 yards directly behind.


The Hill O Many Stanes

Having had my fill of the golf courses I headed on towards Wick, a larger town on the east coast. How large? you ask. It has a Tesco and a Lidl, and two curry houses. But before I got there, I had one stop I had been looking forward to making. The Hill O' Many Stanes sits off the road, a quarter mile up a track. It is exactly what it says it is... a hill of many stones. Planted in 22 rows, 196 flagstones rise out of the earth. They are not tall, or huge, but their reason for being is still unknown. They may have been buried to commemorate loved ones, some 3,000-4,000 years ago, or to signify burial plots of slain Picts... either way, the place has a serene calm to it and the setting is beautiful.

The Hill O Many Stanes gave me a stain all of my own. Walking the paths I trod in dog shit but didn't notice until I got back to the car. I proceeded to smear it on the car floor before I got that oh-so-familiar smell. Oh well, at least it covers up the smell of sheep shit that I have all over my golf trolley wheels from yesterday. I'm a glass-half-full kinda guy.

Next up, is Wick Golf Club... but I have to be honest and say that there are bigger things in the near future: there is a faint hint of some Northern Lights tomorrow night, and I'll be as far north on the UK mainland as it is possible to get.