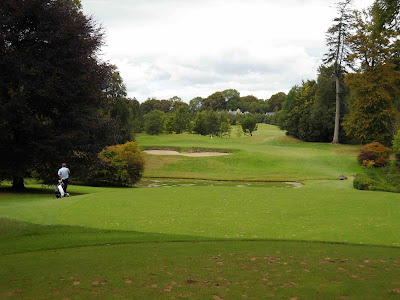 [Photo: the par three 11th is a sweet hole, although golfers on mobile phones should be weighed down with rocks and left in the bottom of the pond.]
As mentioned yesterday, Mount Juliet have just launched their Majors Series, in the run up to the Masters at Augusta.
This Series is an opportunity for you and three friends to enter as a fourball and play one of the top parkland courses (more than one Ranking lists Mount J as THE top parkland in the country) with a couple of very attractive additional incentives thrown in...
Pro Am
If your team wins this Series event - which is open between now and April 5th - you will qualify for the Mount Juliet Major Grand Slam in September... win that and the Lexus Race to Mount Juliet Pro Am beckons.
The Series event is a straightforward Stableford format where two scores count on 16 holes, and all four count on holes 9 and 18.

Rory Payback
And second, you will get all of your green fees back if Rory wins the Masters. In other words, you get payback if Rory gets payback. Not a bad gamble when you think about it.
Green Fees
You can play any day of the week and green fees are exactly what you'd pay on the day...
starting from €60 per head.
To register interest in the Mount Juliet Major Open event contact Mount Juliet on (056) 777 3000 or click here to book your fourball. 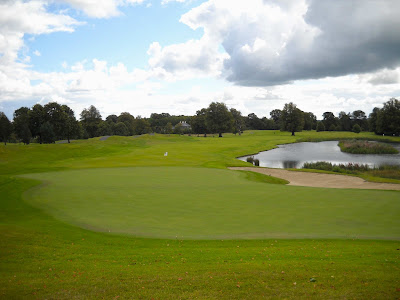 [Photo: the par four 18th, from green to tee, with that water threatening your approach shot all the way.]
The 10th Hole
The par five 10th is listed as my 'Best 10th hole in the country'. The drive may be a straightforward affair, but after that it's all about choices. A copse of large trees fronts the green and the golfer can go left of it (the more obvious option) or right of it (marginally shorter but the angle of the green is less favourable and the sea of bunkers is most distracting)... and it all depends on whether you're long enough to open up the green. I guarantee that unless you hit the perfect shot you'll scratch your head and think: 'I knew I should have gone the other way.'
Posted by Kevin Markham at 8:56 PM