Ballybunion Cashen... A Question of Design. 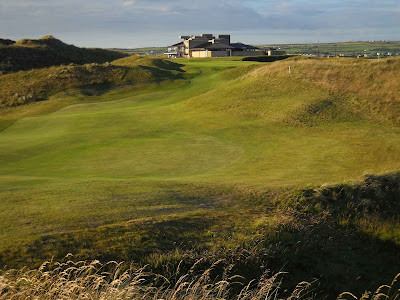 [Photo: the final approach of the day, with clubhouse behind]
Why is it that the Cashen course at Ballybunion Golf Club causes such controversy... or is it only amongst links purists? I have had several conversations with golfers who complain that the Cashen is not a 'real' or 'proper' links... not like the famous Old course next door.
I even understand why people complain: the Cashen, which opened in 1982, combines links landscape (and what a landscape it is) with target golf. In other words, there's no room for traditional bump and run, which is how the designer (Robert Trent Jones Senior) wanted it to be.
My question is: why is that wrong? Why is it any different to creating a parkland lined with huge mounds and fake water features? Why is it different to a links course where dunes are re-located, flattened or built up?
Surely a course designer - rightly or wrongly - has the freedom, the imagination and skill, and the backing of the club/investors to do what he or she has been hired to do. Isn't that the point of paying them!
LinkedIn Conversation
This blog was prompted by something I read on LinkedIn: On one of the Group discussions (Irish Golf), Arthur Spring, Irish golf course designer, was discussing where to play in Kerry. He said, and I quote: "Only the Old in BB. Avoid the Cashen."
Really! Would you want to avoid this... 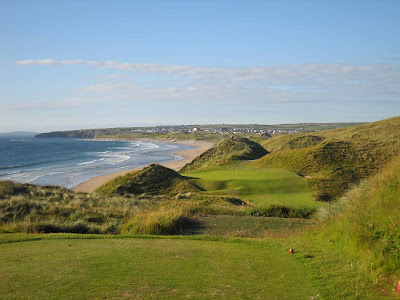 [Photo: the par three 16th]
There is no implied criticism of Mr. Spring here, by the way. He's a professional designer; I am not - nor have I ever claimed to be, but I know when I look at a course whether I like it or not. When you, as a golfer, arrive at a different club you know fairly quickly whether you like the course and its design, don't you. The beauty of the Cashen is that it draws you in quickly.
How Big is Your Green?
So, other than the 'target golf' complaint, what else do golfers not like? Apparently the greens are too small!!! Surely greens are as big as they need to be... they simply require you to be more accurate, and that's what Trent Jones was asking golfers to do. 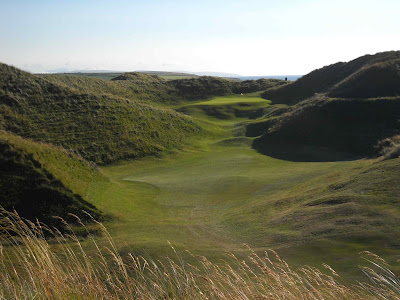 [Photo: approach to the par five 15th]
In For Free
The Cashen is not to everybody's taste and not enough visitors are paying to play it. Ballybunion GC recognise this: they now include it 'free' when you pay to play the Old course, but I wouldn't miss it for the world. It has one of the most enthralling back nines in Irish golf and, like its sibling, it ends above the sea. Hopefully the photographs will give you a taste - but there are plenty more here.
When I met the Captain on my visit in 2008, he muttered that they had a war chest of money to get the Cashen redesigned (by Martin Hawtree), so that it could follow more traditional roots. I see the logic - a course is there to be played after all and Ballybunion would become an even mightier destination if their second course was compared more favourably with the Old.
I love it, and I would be disappointed if it is redesigned. Is it not a good thing to have something that is different? Nothing has happened yet, due to the recession no doubt, but at least I can say I have had the joy and the privilege of playing it.
If you, dear reader, have played the course, I would love to hear your thoughts. 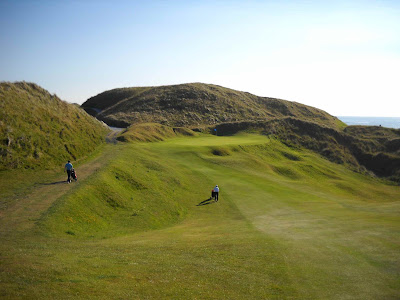