Have Clubs, Will Travel... The Question is How.

Really, seriously, do the likes of Ryanair and Aer Lingus actively want to discourage club-carrying golfers from travelling with them anymore? Charging up to €100 to carry ‘Sports Equipment’, which is automatically labelled as excess or oversize baggage, seems increasingly ridiculous when you consider that:
1. Other airlines do it for far cheaper or free – which just makes Ryanair look insanely greedy (see Table below).
2. You can hire the latest models of club for a week, for about the same price as it costs to transport yours with some airlines. 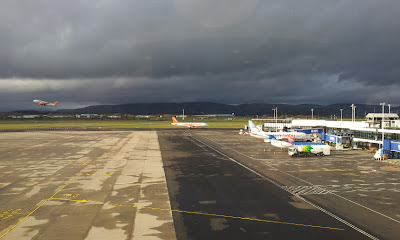 Then again, at least Aer Lingus and Ryanair are upfront.

Some other airlines which say there is no charge for carrying golf clubs are being somewhat disingenuous. They will carry them for ‘free’ as long as they are under a certain weight AND that they don’t exceed your baggage allowance… which for us mere mortals in Economy is ONE bag. Only a handful of airlines are true to the spirit of FREE!

* Obviously there are other airlines (and flights to/from USA are not covered here) as well as travel companies like Monarch and Thomson, but these are the main airlines I found flying to Europe from Ireland and the UK.

Stuff It & Bag It

You could try getting around the ‘one bag’ rule by cramming all your clothes in with the golf bag so you’re only left with carry-on luggage, but when you’re golfing abroad you need to take a lot of kit with you… and some airlines restrict weight to a mere 15kg. Consider that the modern lightweight bag weighs approximately 3kg and a set of 14 clubs weighs 8kg and you’ll

appreciate that there’s barely enough room for balls, waterproofs, shoes** and the other general bits and pieces that seem to enter your bag via osmosis.

Besides, airlines are wise to the stuff-it and bag-it technique: SAS specify that you can take 14 clubs, one pair of shoes and 12 golf balls… let’s hope you’re not planning to play somewhere like The European Club on a windy day – you’ll only get half way round.

** On the subject of travelling with shoes, here’s an entertaining experience endured by one golf blogger (GolfMadChick) at Sydney Airport

With some airlines you can’t even pay for your clubs when booking online – you have to phone up and do that separately… and if you forget and have to do it at the airport then the price goes up.

So, what are the alternatives to paying these surcharges?

You could try FedEx, DHL or some other national carrier. I believe this is a popular method from the USA, but the simplest solution is to hire clubs when you get there.

I have hired golf clubs on a couple of occasions: once at Dalmahoy, outside Edinburgh, when I was given a crisp, clean and perfect set of Titleists; and again at Mulranny in Co. Mayo, where the bag contained a driver, a putter, a five iron from the Dark Ages and five wedges… but no shovel to clear the fairways of all the cow crap. 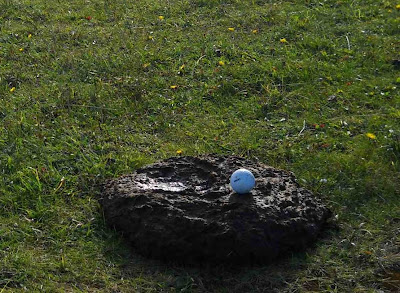 So, you take your chances, and you typically hire clubs at the golf course for the day, which can make it pricey over a number of rounds/days.

But consider the positives of hiring clubs:

a) You have less luggage to worry about. No cramming everything in, no cursing the golf travel case that never worked in the first place because the wheels fell off two days after you bought it, no dragging it across the floor to check-in as kids jump on for the ride and old people are brutally felled in your wake.

b) You don’t have to worry about damaging your clubs during transit, or having them stolen while you’re abroad. How do you protect that precious driver when it’s the longest club in the bag? The answer to that conundrum is to cut a broom handle down to size so it is marginally longer than your driver and will therefore take the pressure. Or you could use a hard travel case… and that’s another problem entirely.

c) You end up with different (often very new) golf clubs so it’s a new experience.

d) You don’t have to worry about the weight of your clubs/bag. 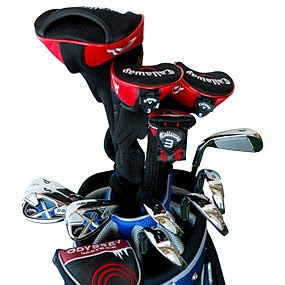 Clubs To Hire is an Irish outfit which operates in a number of countries and gives you the chance to hire clubs at various airports for a week. It sounds simple… a ‘why didn’t I think of that?’ moment, and it is proving highly successful.

In truth it was Tony Judge who set up the company under two years ago, with Paul McGinley a partner and a natural (marketing) figurehead.

Why is this such a good service? Actually, it’s obvious:

· Choice. Clubs For Hire provides a wide choice of golf clubs. You even get the chance to play with the latest clubs (e.g. Taylor Made R11S), which might whet your appetite when you want to upgrade your own.

· Booking. Visit www.clubstohire.com and book online just as you do for any service nowadays.

· Airport Collection. You can pick them up from any of the 10 airports where the company operates: Alicante, Belek, Dublin, Edinburgh, Faro, Malaga and Murcia, with Gran Caria, Lisbon and Tenerife opening in the coming weeks.

You don’t even have to clean the clubs before bringing them back.

I have nothing to do with the company, but I think Clubs To Hire is an excellent solution to the quandary of taking your clubs abroad. You’re also paying your money to a company that cares about golf, and not to an airline which treats your bag as a ‘toss the caber’ competition.

Posted by Kevin Markham at 9:55 PM