Ever more inventive ways are coming along to make us Irish golfers sit up and take notice: Mount Juliet have just launched a Majors Open Series (more on that in the next day or two) and there I was thinking what a great promotion when along comes Druid's Glen with something that really grabs the attention. It helps of course that Druid's is one of my top two parkland courses and I have blogged about its brilliance a number of times, but who wouldn't want a shot at winning €1,000,000!

On 1st June approximately 75 golfers will have the once in a lifetime opportunity to win €1,000,000 in the Shot In A Million competition. Any golfer with that immeasurable combination of skill and luck who gets a hole in one on the signature 12th hole wins the money. 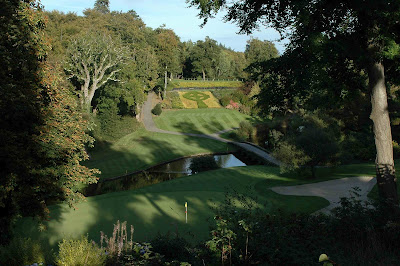 [Photo: the par three 12th, from above the green looking back to the tee]

How Do I Qualify?

That's the beauty of it... you don't have to qualify... you just have to pitch up and pay your green fee on Monday to Thursday between now and the end of August 2011.

Not having to play well adds an extra something when your golf is so poor the only thing you'd legitimately qualify for is digging dirt out of a hole... I speak from the bitter experience of my St. Patrick's Day round. 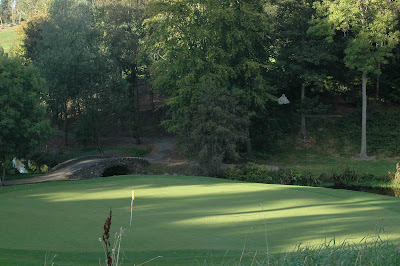 [A prayer at the Druid's Altar, tucked in the trees by the 12th green, might help]

Play the Glen or the Heath

Golfers who play golf on either Druid's Glen or Druid's Heath championship golf courses will be entered into a daily draw, from which one winner will be invited back to play in the Druid's Glen Shot In A Million competition in June.

Or you can listen to the Today FM Ian Dempsey Breakfast Show from Tuesday 20th March to be in with a chance of winning one of 25 places being given away over the coming weeks.

How Much to Play?

Midweek green fees are as little as €50 on Druids Glen and €35 on Druids Heath.

Email ThisBlogThis!Share to TwitterShare to FacebookShare to Pinterest
Labels: Druid's Glen, Shot In A Million