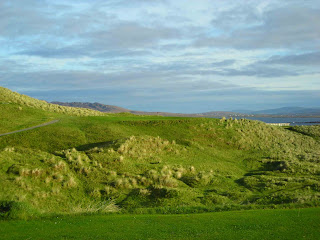 It was unavoidable - I knew it would be. Once a book is in print, things will change. Some are forgivable: others aren't. So here are some 'updates' for the book and I imagine that these will not be the last.

Narin & Portnoo now have a new clubhouse. When I visited in October 2007 they were just plans on a board by the bar.

Coollattin's hole order has changed considerably, so references to holes are no longer accurate. I hear that the new holes are very good. I think Coollattin is an excellent track so my review remains the same.

Elm Park - this one isn't so good. I have played Elm Park several times in the last 10 years, but a friend pointed out that one of my descriptions - the approach to the 10th green - was inaccurate. I 'remembered' a pond being in front of the green and trees shrouding it. It wasn't the 10th green I was thinking of, it was the 11th tee box. As my friend, Tom, pointed out, to hit into the pond would be an extremely wayward shot. Elm Park aren't going to like my review, but I'd like it to make sense at least. 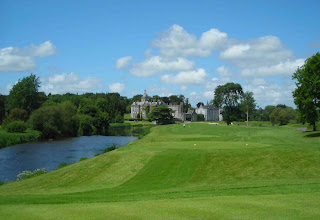 Adare - I say that Ross Fisher won the Irish Open in 2008 at the club. Not true. It was Richard Finch. Apologies to Mr. Finch and his escapades on the 18th (pictured).

If anyone has any more, please let me know. But please don't go hitting me with changes to green fees, because that one was always going to go one way or another.