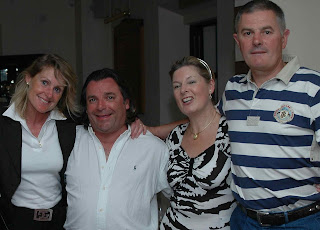 The launch of the book took place on Tuesday June 2nd, at Greystones Golf Club. It had been a long-running battle to find a date when everyone was available: the original date had been in mid-April. But no matter, everything fell into place at just the right time and it was a very enjoyable night – even if the renovations to the clubhouse had just begun. George Hamilton launched the book for me, after he had been introduced by the club Captain (Brian Farrell Snr). George did a great job, but then I knew he would – he’s got that kind of banter that keeps it all ticking over. I still find it mildly ironic that I got a football commentator to launch the book when I don’t even like the sport. Then I got my turn and thrilled the crowds with my snappy wit and amusing stories. Or perhaps that was just my imagination. Actually, my speech was very short and I managed to forget one very important person: my agent, Jonathan. At the end of my speech, my wife hollered out that I hadn’t thanked him. So I did. But I should have mentioned that at my wedding I also forgot to thank a very important person: my new wife. (At least she had the decency not to holler at me on the day.) So Jonathan was in excellent company. 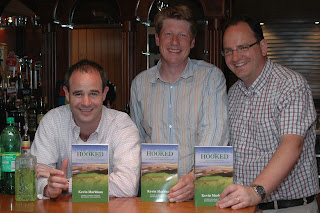 Approximately 70 people turned up: golf club members, old friends, older college buddies and a whole bunch of people I hadn’t seen in ages. I even lured the General Manager from Scrabo in Co. Down. I’m sure it had something to do with the various awards I had bestowed upon the club, but it was a long journey however you look at it. Scrabo was one of 24 clubs to give me a free fourball (they threw in a dinner for 8 as well) for a raffle, and after several people had walked up with silly grins on their faces, and the catchy: “I’ve never won anything in my life”, I finally worked out the value of the green fees I gave away. €8,000 is a large figure, so an enormous thanks to all the clubs involved: 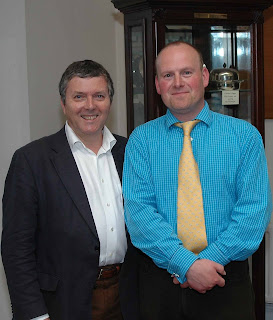 I did ask for fourballs from other clubs who scored well in the book, and while some said they would send me vouchers but never did, a couple of the really big boys just laughed at me. Well, I laughed a lot too on the night, so no complaints from me.

And many thanks to Greystones Golf Club for hosting the event and everyone who came along.