So, I got to play my beloved Portarlington again. It was the club’s Open Week so I convinced my Dad (it wasn’t too hard) to head up for a game. It was my Father’s Day treat, but as it turned out I didn’t pay for anything. Dad bought lunch and then our playing partners (it was a Classic – two scores to count one very hole) insisted on paying for our entry, and the club paid for our dinner. A man could get used to this. 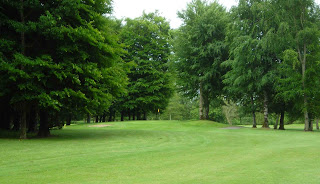 Our playing partners were Tom Hainsworth and his son, Dave, who was last year’s Captain - I’d met him on my previous visit. Tom has already been Captain twice and is now a Trustee. It seems the Hainsworths play a significant part in the club’s history, so I heard some amusing stories. Tom is the longest member at the club – 67 years. As soon as he was born his father went to the club and took out family membership, and he’s been a member ever since. Dave is 41, and he’s been a member for 41 years. They don’t hang about when it comes to membership. Dave has three young daughters and I forgot to ask if they were all members as well. Dave, as Captain, got to plant a tree of his choosing, wherever he wanted (within reason one assumes). So there’s now a copper beech on the 9th fairway which, according to Dave, is the perfect line on a tricky dogleg.

The story that amused me most had to do with the club’s expansion from 9 to 18 holes. A field/wood came up for sale and the club bought it for £34,000 in the early 90s. Of the trees that were cut down to cater for the new holes, there was a lot of ash. The club harvested these and sold them to someone who made hurleys. The price the club sold the wood for? £34,000. A different but still very effective kind of course management.

One of these new holes is the 7th. It’s Index 1 and it is beautiful (see photo). 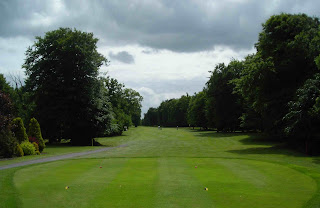 The flag is visible and your right flank is all trees. The left is more open, but trees abound, and it is the big oak that squeezes you on the left that makes this hole so difficult. I nominated the 14th as my best 14th in Ireland, but the 7th could easily have been in there too (as could the 15th).

Red squirrels can still be found here (and we saw one on the 7th) and the club went to great lengths to get rid of the greys which are really no more than rats with bushy tails. The trouble is, the greys have now been replaced by mink which escaped from a farm over in Straffan.

Was I as enamoured with the course as I was on my previous visit? Yes, absolutely. But there are some extra comments to be made. I say that it is a level course; it is, but there is more shape than I remembered. I say that the greens are tame, but the greens on the new nine holes are certainly not, with some good tricky curves, and they were fast and in superb condition (and remember this is after 7 days of Open Week competitions) – it is a testament to how good the course looks/works, that I really didn’t know there were a new nine holes. And finally, I mention the River Barrow in my review, but water also appears elsewhere on a few occasions - as big ponds: believe me, it makes a huge difference on the short par five 13th.

Of course, the key test came down to whether my dad liked it. And he definitely did – even though our collective efforts in the competition were rather dismal. There are plenty of challenges at Portarlington, plenty of options of what to play, and it’s great fun. It’s a course I would happily play day in, day out, and the food in the clubhouse was very good. All in all, a perfect golfing package.

Thanks Dave and Tom. Dad and I will be back.
Posted by Kevin Markham at 5:57 PM