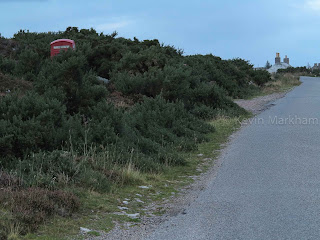 There is something very strange indeed about driving these single lane roads and coming across one house every few miles… and one red telephone box opposite.

It puts population density into perspective, that’s for sure.

I played Reay Golf Club this morning, an
18-hole layout by James Braid. And speaking of population density, I had the course to myself. It’s a links course and it took my back to my Barely Cove days, in Cork, where I first learned to play the game as a five year old.

Those natural, scruffy (in a good way) fairways, so far removed from the carpets of Royal Dornoch, were a joy to play on, and for the second most northerly links course in mainland Britain, the greens are in very good shape. This is natural links golf and it tumbles away over some bumpy (initially) and hilly (back nine) terrain beside Sandside Bay (look at the video).


It’s worth noting that the course opens with a 235 yard par three. The 7th, also a par three, is Index 1, at 196 yards. There are six par threes in all. Worm casts were popping up everywhere, which didn’t help the course’s appearance much, but once they weren’t directly behind your ball you were fine. As it’s James Braid, you can expect a few interesting holes… and the short downhill par four 13th fulfils that role perfectly. A great drive will see the green hidden from you, as it’s over a sharp ridge which then drops quickly to the putting surface… with two hidden bunkers in front.
You’ll need some good energy levels for the back nine as it rises and falls over a sharp incline. Plenty of tempting shots, but often hard work in between.

Then it was a long drive west across the small narrow roads towards Durness. It is a beautiful, solitary drive. During a one hour stretch I can’t recall passing another vehicle… although at one point I did pull over to let a white van pass me. It was a Tesco delivery van and it was a long, long way from home. The nearest Tesco store was some 40 miles east, in Thurso. I wondered how much the delivery charge was going to be. I sure hope someone was buying more than a pack of Pot Noodles. 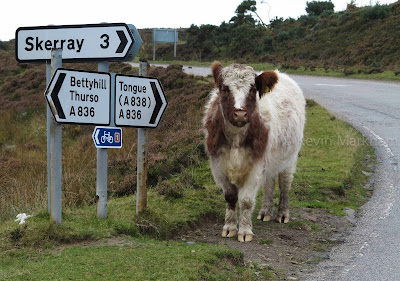 The scenery is mountains and beaches and peninsulas and bays and endless sky. Bracken and heather bring colour – even now – to the hillsides and roadsides, and the occasional burst of trees adds the green and golds. It is hard to concentrate on the road. I was told to look out for the beaches – one in particular was drawn to my attention by Andy.

“When you get to Coldbackie, stop. There’s a sign by three houses and if there is some sunshine the colours on the beach and sea in the cove are like the Caribbean/Amalfi coast”, he said.


The sun wasn’t out but this is what he is talking about. He was wrong about the three houses… there are now four as a new one is being built. I tried taking a video of the peaceful scene, the only sound coming from the crashing waves, but the builders would start banging something or shouting at each other. Shame really, but they had a job to do and there were plenty more peaceful and enchanting places to follow.


That’s the thing about this section of the North Coast 500… you could turn down any of the side roads and discover some hidden, some unexpected beauty. Signs point you to forests, to headlands, to mountain walks, to beaches. In Strathy, I did just that, steering the car up a narrow laneway as my GPS implored me to turn back. I parked and walked up a huge dune so that I could look down on the beach and the run of dunes buffering the sea from the land. You’d fit a nice nine holes in there, I thought.

Here are a couple of the views. The first is taken by the bridge crossing the Kyle of Tongue. The mist-shrouded peaks on the far left are Ben Loval and Ben Hiel – they look like a scene out of Lord of the Rings. Apparently Tolkien came here. 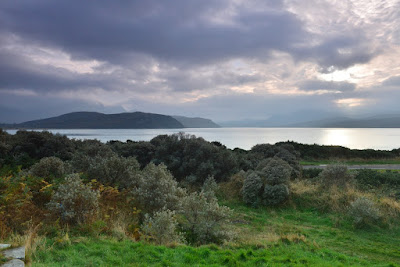 Next is a view over Loch Eriboll to distant peaks. The small ‘island’ (it’s actually the Ard Neakie peninsula) in the foreground has the remains of 19th century kilns tucked into the side of the hill. 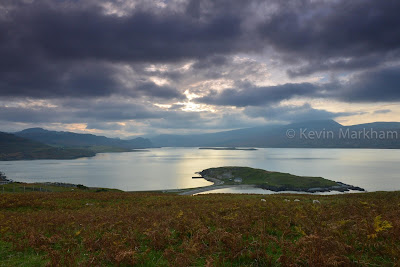 And this is the sunset I got on arriving in Durness and my B&B for the next couple of nights - Hillside B&B. 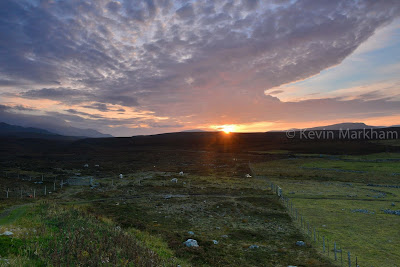 Tomorrow, Durness Golf Club... the most northerly links course in mainland Britain
Posted by Kevin Markham at 8:47 AM