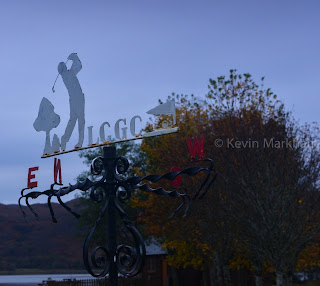 I played three holes of golf today. Well, two and a half. When you hit your wedge and you get a faceful of water, mud and moss in your eyes and nostrils you tend to declare a course unplayable. That was Lochcarron Golf Club. I was still spitting out the moss and dirt on the 7th.

It rained during the night. Big, big rain. I didn’t realise until I walked out of the hotel and the road was flooded. It was so wet it looked like the road was part of the loch alongside. I drove the half mile to Lochcarron GC and after assessing the
conditions decided I’d give it a go. It proved a poor decision, and after that shot on the 3rd fairway, I made the short walk back to the clubhouse and put my clubs back in the car. I walked the rest, which was definitely the right decision. Everywhere was sopping and the course quality is basic, so the mossy fairways were like sponges.

The setting for the course and clubhouse is magnificent. The loch stretches for a couple of miles, with those oh-so-familiar mountains framing the landscape. The course itself is nothing of consequence. A small space, a river and road running through it, a church and graveyard, and lots of gorse. The 1st green sits directly beyond the 2nd tee… an interesting concept… and holes 2 and 3 are also on this side of the road. The 4th plays over it.

Let’s be honest: this is here because locals want somewhere close to play golf, and it’s maintained and run by the members. I admire their passion.

After leaving the Lochcarron Hotel (where I was placed in the disabled room for some unknown reason – maybe it’s the hunch), I began the drive back to Inverness. It was the final side (west to east) of the ‘square’ route. It is not as dramatic as what I have been through and I quietly laughed at a carload of tourists heading in the opposite direction, photographing a pretty but comparatively small mountain… wait till they see what lies ahead.

The route east took me to the Rogie Falls, near the village of Tarvie. It’s famous for its salmon run and after the night rains the falls were full and rumbling. They’re not particularly big or dramatic, but they are pretty and I once again found myself on a suspension bridge. Fine when you’re there by yourself, but not so good when some big German lad marches by and you’re propelled up and down a couple of feet, with no control whatsoever. 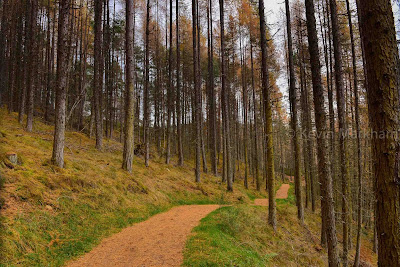 There’s a nice woodland walk here, too, but I don’t know that I’d sit out and have a picnic as one family was doing. It was 10 degrees Celsius.

And then the rain came. Hard, fast and violent. I watched in my rear view mirror as the family fled for the car. I imagine the German guy got soaked.

Strathpeffer Golf Club was my afternoon visit, but the rain was definitely going to be a problem.

Isaac Newton’s theory (law of physics) was that what goes up must come down… we all remember the tale of an apple falling from the tree. Newton should have come to Strathpeffer… where what goes down must go up. At least, that’s what I’d been told. The club proudly boasts two things: it was designed by Old Tom Morris, and it has the largest 1st hole drop from tee to green of any course in the British Isles. The green is the lowest point on the course, too, which suggests that the only way is indeed up.
It’s not true of course. Yes, there are plenty of ups… but there are downs, too. There are glorious tee shots at the valleys that lead out to the Black Isle… and there are seven par threes, all completely different to one another. On the front nine you'll play four in a row, so it’ll come as no surprise to learn that the par of the course is 67 (5,000 yards).

I met and had a long chat with George Sparks, one of those people who has been involved in the club for years, has seen just about everything that goes on, and has a passion for the place that never seems to dim. He’s in his 70s.
I learned a lot about the club and since the rain was still heaving I had plenty of time to listen to the stories. Eventually, however, I had to face reality: the rain wasn’t stopping anytime soon… and that meant I wasn’t going to playing Strathpeffer.

I did go out to the car, get suited and booted, and walk the course under a – until now – very underutilised umbrella. It’s a hillside gem and it looks a load of fun. Those views are never far away and, apart from the 2nd, 6th, 7th and 9th, the hills really aren’t anything to get too vexed about. I always say that a hilly course offers up some of the most delicious downhill shots. The 1st hole is a case in point.
One thing I’ll say for the Scots (and the Irish, too) – they don’t see rain as any kind of problem. I was standing on the 9th tee, the rain pouring off my umbrella, when two dog walkers ventured by. ‘Good afternoon’ they said as they passed, striding up the hill. They were covered head to toe in waterproofs and I never saw a face. But I did see the dog’s; a black Labrador, wearing no waterproofs, and looking utterly miserable.

Tomorrow is the last day of this North Coast 500 trip... and just two courses to go.
Posted by Kevin Markham at 10:15 PM