It is fitting, I feel, that it rained on my final day. I stayed at a converted croft house (some 150
years old) in Brahan, outside Dingwall, and the rain was so heavy during the night that it was setting off the outside security light. 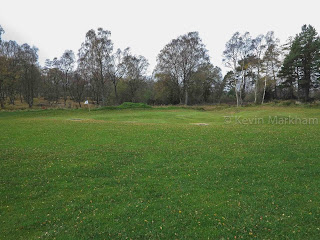 Brahan Golf Club, which is Jon’s nine hole course – the Tollie Guesthouse where I stayed is run by himself and his wife, Claudia, right next to the course – is an intriguing creation but one that was closed for the season when I arrived. Jon designed it himself (after working in course construction for many years in Switzerland and Norway) and uses only organic materials to maintain it. You’ll find no chemicals here and Jon is the only one who works on the course.

Sounds to me like a labour of love. We walked it in a gale, eyes streaming and having to shout much of the time to be heard. There are 9 greens which each have two flags. There are two tees for each hole and the front nine play for the blue flags, while the back nine play to the white. Given the size and shape of the greens and the different tee boxes, it creates startlingly different holes.
But Jon has encountered a recent problem: red deer. It used to be only small roe deer, but the reds are much bigger animals, leave bigger prints and eat the flags… but only the blue one. They have no interest in the whites.

“This is a course for locals and beginners and that’s the market we’re after,” Jon tells me. He has no delusions of grandeur and the course is unlikely to draw the travelling golfer. That said, there are fun holes and some highly entertaining greens – some as much as 50 yards long – and they are quite mountainous in places.

The last course on my travels was Muir of Ord. And, like Brahan, it had been a late addition to the itinerary. The two courses are not far apart. Muir of Ord is yet another James Braid course, and the fourth I have played on this journey. The man was prolific and gifted. There are six courses in Ireland which carry his mark.
Muir of Ord has small greens… small, small greens… and on a course this short (5,542 yards, par 68) with only three par fours squeezing over 400 yards from the back tees, that is the course’s biggest defence. That… and the wind. It's a lot of fun to play with holes streaking along the flat on one side of the railway line, and finding far more hillside movement on the other. I was directed to the 12th, on that hillside, as the club’s signature hole – a par three named ‘Thirsty’, which drops from a height, over a ditch to the green. The landscape trips into the distance beyond, with wind turbines on far hills. I’m not sure how I managed to work it but the only time the sun appeared was when I walked onto the 12th tee.

Weather conditions were brutal on Monday and, heading home, I appreciate how lucky I have been during my 20 days in Scotland. At least half of it was spent in sunshine with a further five days in windy but mild conditions. Put it this way, I brought 20 hand warmers with me – one for every day – and only used six, of which one was when I was our for two hours, shooting the Northern Lights. The weather took me – and most of Scotland – by surprise. With the rain now pelting down it’s safe to assume that normal service has been resumed.

I’ll do a recap in the next few days, but one particularly remarkable moment I forgot to mention on Day 18, Sunday, was to see a man standing at the side of the road in full Scottish regalia, playing his bagpipes. It was Remembrance Day, and seeing him standing alone, facing into the forest to offer his own personal tribute, sent shivers down my spine.