Nineteen days, 920 miles, 26 golf courses… this day last week I rolled home with  Scotland’s North Coast 500 under my belt… done and dusted… finished… never to be forgotten. What started out as a golfing odyssey to play these courses (Royal Dornoch and Brora in particular) turned into something so much bigger. The landscape is majestic, the history haunting (the Highland Clearances have refrains not dissimilar to
the Great Famine) and there is something about the wild, enchanting nature of the Highlands that is so alluring it tempts you never to leave… I met several blow-ins on my travels who never have.

The obvious questions are going to be about the golf experiences, but I’m adding in some personal highlights because if you come to this place and take on the North Coast 500, there is so much to see and do beyond the fairway and clubhouse.
1. Best Golf Course
It’s a straight toss-up between Royal Dornoch and Brora… and I’ll pick Brora. Consider me surprised – the glory of Royal Dornoch has been calling to me for a few years and last June I’d hoped to play it with Tom Coyne (on a golfing odyssey of his own) only to find all accommodation was booked out. I played with him at Cruden Bay instead. And then I tried to play here five years ago, but it was just a touch too far from Nairn, east of Inverness. So this time around, me and Royal Dornoch had business to attend to.
Why did I choose Brora over Royal Dornoch, in all its pristine magnificence? Because there’s an extra sense of adventure and drama to the James Braid-designed Brora. Royal Dornoch has that air of perfection everywhere whereas Brora embraces the natural beauty and flow a bit more. Here you’ll find links greens of perfection, intrigue on every shot and sheep and cattle adding that golf-from-the-ages quality. Braid also liked a bit of deception and making the golfer work to find the green.
I’d play either one, any day of the week, and I’m certainly not trying to say that one is better or worse than the other. Courses of beauty, both, but factor in green fees at Brora of £55 versus £120 at Royal Dornoch, and the odds start tilting towards Brora all the more. Then again, they’re 16 miles apart. Play them both and make up your own mind.

2. Best ‘Hidden Gem’ (Links)
Best links course is the 9-hole Durness Golf Club, in the very, very north west corner of the country. You’ll be heading up and down some big dunes for almost the entire nine holes as the course tumbles along with a couple of blind shots and never-ending and inspiring views over mountains and ocean at every turn.  The course is exposed and with the aptly named Cape Wrath across the bay, you’ll understand that this can be a windy adventure.
The condition is excellent – the greens especially – and consider that there is only one greenkeeper. Sheep help with the greenkeeping during the winter, but the young Alistair has done himself and the club proud. It may be too far to venture from Royal Dornoch/Brora on a dedicated golf trip, but as part of the NC500 it is a must-play… and getting here is half of the experience.
The course was laid out by three locals who decided they needed a course close to home… the nearest course is Ullapool, a rather hair-raising drive over an hour to the south. That they achieved their dream, designed the course and built it themselves (the rocks off to the side of the fairways on holes 2 and 3, were dug up and moved by hand) is a testament to golfing dedication.
Reay and Wick golf clubs are 18 hole links courses north of Brora, and also deserve a mention. Reay is a James Braid design. (James Braid designed five of the courses on this route; Old Tom Morris designed three.)

3. Best ‘Hidden Gem’ (Parkland/Heathland)
Allness Golf Club is my best parkland gem. Strathpeffer (designed by Old Tom Morris) and Muir of Ord (James Braid) have all the ingredients of a gem as they are quality courses 30 minutes or so from Inverness, but Allness (also close to Inverness) is not a course that anyone would go out of their way for… which is a shame. The condition is not all you would want but it has so much colour, so much fun rippling through the course, that it will put a smile on your face. Through woods, beside rivers, over gentle hillsides, with six par threes and many short holes it’s all about good looking holes and better looking shots.
4. Least Impressive Golf Courses
Hardly fair to pull out these two courses as they are not really focused on big-game golfing tourists. Rather, they are catering to local golfers, many of whom volunteer at the clubs to ensure their survival. Helmsdale Golf Club on the east coast, and Lochcarron on the west do not offer the sort of conditioning a golf tourist would demand. The greens at Helmsdale are mere mown patches of fairway while Lochcarron’s fairways are thick with moss and must be wet for most of the year. Both of these nine hole courses, however, sit amidst beautiful scenery.
5. Top 10 Golf Holes
So many to choose from and – not surprisingly – Royal Dornoch has a heap of superb contenders. The par threes are brutally tough – Tony, the Manager at Brora, told me that the par three 2nd hole at Royal Dornoch is the only short hole that he lays up on. Going left or right spells absolute doom as you’re hitting up a bank some 8 feet high. Holes 8 and 17 are two par fours that stand out for me, both driving over a black and white post before the hole drops sharply and doglegs left, revealing a beautiful view of the hole as you arrive at the ridge.
Brora is one enthralling hole after another and it’s straight out and back routing is all the more remarkable as the inland holes may well be stronger than the seaside ones. Holes 14 and 17 are my pick, while the par three 6th – named Witch – is a beauty-and-the-beast experience (see photo above).
Golspie, Tain and Fortrose and Rosemarkie, which sit just behind Brora and Dornoch in the pecking order, all have some beauties, and even the weaker courses, like Ullapool (holes 2 ,3, 4), Invergordon (9) and Thurso (9, 13) promise a couple of sweet moments. Inverness has a lovely run of holes from 6 to 15, and Gairloch, on the west coast, has two blind par threes in its nine hole layout.
Top Ten Holes (only one allowed per course)

7. Best Views
Several courses have stunning views, but there aren’t many clubs anywhere that can compete with Durness. Bays, beaches, islands, headlands, lochs, mountains, valleys and, quite possibly, navy shelling.
8. Best and Worst Accommodation
I stayed at B&Bs mostly (due to budget constraints) and they were all good. Everywhere I went the hosts seemed to be able to add that little extra and the personal touch always made a difference. The most comfortable B&B was Valley Views B&B in Thurso.

I spent three nights at the Royal Marine Hotel, in Brora, and not only was it very good value, but the food was superb and the hotel has its own, dedicated James Braid room… which is only fitting as it’s a one minute walk to the golf club.
As for the worst, there’s only one contender for this and that’s because I didn’t book accommodation for the night in question and was driving around desperately trying to find somewhere with a spare room. The Lochcarron Hotel is a bit old and certainly tired and while I had a perfectly comfortable night, I was put in the disabled room which, to be frank, was a health & safety disaster waiting to happen. Power cable extensions stretched across the floor just begging to be tripped over. Not the worst place I’ve ever stayed in, but you will find better nearby.
9. Non-Golfing Highlights
The North Coast 500 is a fantastic drive. The scenery is mind-blowing – along the west coast especially as the road slides above lochs, through valleys and over mountain passes. There are few houses here so you can feel utterly isolated. You could pick any 50 mile stretch and not be disappointed but Gairloch to Applecross is mind-blowingly beautiful, with the island-studded Loch Maree, the 16,000 acre Torridon national park and the final coastline drive to Applecross summing up the beauty of a Scottish landscape that just stretches on and on …

… for me, the rainbow over Ardheslaig village, not far from Applecross, sums it up perfectly. 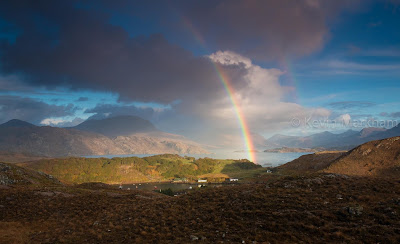 I’m not one for wrapping history in glass cases but I understand why the Shandwick Stone had to be protected. The carved slab stands nine feet high and was erected by the Picts over 1,000 years ago. It is close to Shandwick Village, east of Tain. The east coast was home to the Picts for thousands of years and their history and legacy is everwhere.
The dolphins at Chanonry Point (Fortrose & Rosemarkie Golf Club). They appear next to the lighthouse every day to feed, I was told… an hour after low tide, I was told… as regular as clockwork, I was told… They didn’t show. All summer long you’ll see them, only yards from the beach, but come late October and they have better things to do. 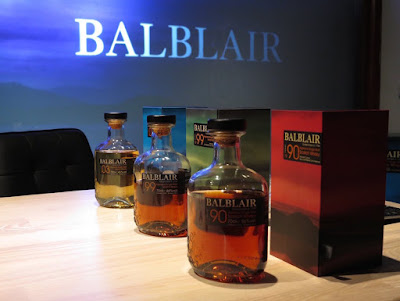 Distilleries. They’re everywhere, as in almost every town has its own. Tain has the Glenmorangie distillery, but drive west for another 10/15 minutes and you’ll come to the smaller Balblair Distillery. It’s really rather exceptional

10. Personal Highlights
I trust I won’t hurt anyone’s feelings at Failte Ireland when I say that the North Coast 500 makes the Wild Atlantic Way look like a pleasant seaside drive. This Scottish Highlands landscape is truly epic in scale and it goes for mile after mile.
Hotels and B&Bs offering excellent Broadband connections wherever I went. These days, that is a key selling point and, as one of my B&B hosts pointed out, it’s the first question they’re asked, 90% of the time.

The Northern Lights. I’ve never seen them (maybe for 2 minutes in Norway a few years ago) but up at Thurso they came out for a 90 minute show. While I was there, a barn owl flew directly over my head.
Discovering that Royal Dornoch is everything it’s cracked up to be… and that Brora is every bit as good. Discovering that Durness is a little slice of heaven. Discovering that golf in the Highlands is embraced with real spirit and passion... no matter the quality of the course.

Playing Tain in two and a half hours, with a three ball right behind me every step of the way. That's how golf should be every day of the week.

Enduring mild sunburn… in Scotland… in November.
Anyone coming this far north to play golf has plenty of choice, but you should look at the North Coast 500 for other reasons.

While so many golfers nowadays just rush from one course to the next, trying to cram in as much golf as humanly possible, the North Coast 500 is a perfect opportunity to slow things down and turn golf into a much bigger and more colourful adventure.
Tain or Dornoch (and Inverness for golf to the east and south) are the ideal spots to stay and play on the NC500, but take on the full 500 mile route and you can stop off at Wick, Reay, Durness and Gairloch golf clubs along the way. That should keep your golf habit sated.

But, however you choose to do it, the North Coast 500 and the Scottish Highlands are not to be missed.
Posted by Kevin Markham at 5:19 PM