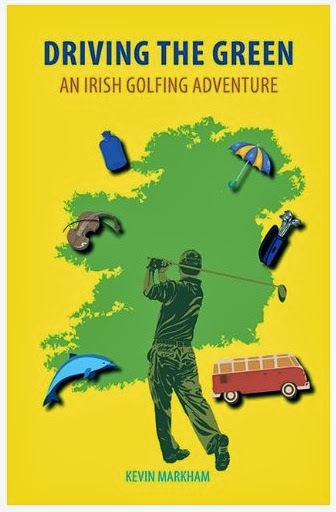 Ireland's Top Ten Fairways Less Travelled reaches the top three pairings. These are going to be divided up - with each of the courses (parkland and links) written about separately. As the top three they deserve no less.

This is the Number 3 Parkland.

In addition to the free fourball for this course (see below) I'm going to offer an extra prize... there are five Fairways Less Travelled courses remaining in this blog series - three links and two parklands - whoever can guess the most will win a copy of 'Hooked' AND a copy of my new book 'Driving the Green' (when it's published in May). In the event of a tie one name will be chosen. Leave your five guesses in the Comments box and be sure to include your email address.

When I first arrived at Portumna, and almost aced the 2nd hole, I could not comprehend how I had never heard of a course this good… especially as it has been in existence since 1913. Even today, the chatter among golfers I know rarely mentions this astoundingly charming parkland. Routed across an oak-laden estate and entrapped by a dense woodland border, Portumna has 18 wonderful holes that practically caress the gently undulating landscape. It is that natural.

And then there are the extras: tall stone stacks are scattered around the course (they were vantage points for ladies to watch the horse racing that predated the course); and deer use this terrain as their personal fiefdom. On several occasions I found them grazing across the fairways.

It's lazy, sweet golf, with room to play off the tee and attractive approach shots with forest backdrops. The routing has plenty of variety as holes dip in and out of woods, and while there’s only one dogleg of substance (the right angle 12th) the gentle curves evident on many other holes add to Portumna’s visual appeal… and challenges.

Portumna’s par 72, 6,100 metres from the white middle tees ensures your Driver will be well used.

Hole of the Round
Demanding accuracy on both approach shots, the par five, Index 2 17th is the hole of the round – lake on the right, tall pines on the left – but you will encounter lone trees or tall stands on almost every hole. The par three 5th is a gem, dropping down between the trees, and the par five that follows has beautiful shape which is enhanced by its isolation.


I would play this course ahead of many of the ‘big name’ parklands – and yet like so many of Ireland’s Fairways Less Travelled, Portumna possesses an unaffected air (and ridiculously good value green fees) that adds to its golfing bliss.

As a small aside, Portumna GC celebrated its centenary in 2013, and the final act of the year was to plant an oak tree and bury a time capsule which is to be dug up in 100 years. It's a nice touch. Here's what appeared on their Facebook page:
The final centenary event of the year took place on Sunday 29th December at a ceremony at the Club where a commemorative time capsule was buried on the course close to the 18th tee box. Centenary Committee chairman, John Harte, read a letter to the assembled audience which detailed the contents of the capsule which included the Club’s Centenary book ‘From Little Acorns’, a list of 2013 members and their respective handicaps, a club jumper and tee shirt, a club fixtures booklet for 2013, a score card, photographs of the course, a photograph of past captain and presidents and other 2013 memorabilia. It is hoped that the letter will be opened by the members in one hundred years from now, hopefully in celebration of the continued success of the club. Joe and Lillian Austin kindly sponsored a fabulous oak tree which was also planted on the course. The ceremony was followed by a social event in the clubhouse for the members who braved the wintery conditions and attended the ceremony.


Free Fourball
To win a free fourball for Portumna, leave a Comment below with your name, email and answer to the following question:

What is the subtitle of my new book, Driving the Green?  (Comments will remain unpublished to ensure privacy.)

Draw closes on Wed 15th January at 6pm, at which point a winner will be chosen. The winner of the two books will also be announced.
Posted by Kevin Markham at 11:34 AM