A Golfers Guide To Ireland Shoots 23

I was sitting opposite Killarney Golf & Fishing Club’s General Manager at the launch of the 23rd edition of A Golfer’s Guide to Ireland last night. It wasn’t the man I expected. Maurice O’Meara (who collected the Best Golf Club Manager in 2012) recently moved to The Island, and has been replaced by Cormac Flannery, a Kerry native who spent some time working for Troon Golf in the Middle East.

His wife Catherine was with him, also from Kerry, and a sheep farmer. She was in conversation with Dessie O'Neill, the President of Dundrum House Golf Club, who was sitting beside me. He’s a sheep farmer, too (if only part-time). Sometimes you just gotta love Ireland. It is mildly ironic that I am currently reading Lorna Sixsmith’s book Would You Marry a Farmer?

The awards are in their third year and while the venue remains the same (the ever popular O’Connell’s restaurant in Donnybrook), the format this year was different. This time it was a sit down affair and a four course meal. I was on the table with the representatives from Killarney (Best Parkland, Munster), Ballinrobe (Best Parkland Hidden Gem, Connacht) and Dundrum House (Best Overall Hidden Gem). It was a thoroughly entertaining evening with excellent company. And it was particularly rewarding to hear that golf clubs are making plans for the year ahead, rather than merely surviving.
The Guide and the Awards are all the work of Paddy McCarthy at Portside Media - expect to see the (free) Golfer's Guide in your clubhouses very shortly, promoting both golf and accommodation in Ireland.

A Celebration of Irish golf

This was a celebration of Irish golf, with the golf clubs bringing along a combination of Captains, Presidents, Managers, Owners and Head Greenkeepers. By the time it came for the official speech by Michael Ring TD, Minister of State for Tourism & Sport, everyone was in 'good form' and ready for the fire and brimstone he brings to such events. This is the fourth time I’ve heard him make his passionate speech about golf in Ireland and he has more energy than the Arklow Bank wind farm. The figures are always positive, you see… 150,000 golfers visited Ireland last year and overall tourism numbers were up by 7%. The Gathering was a big success – see the graphic below – resulting in hundreds of new jobs. And so it went on. 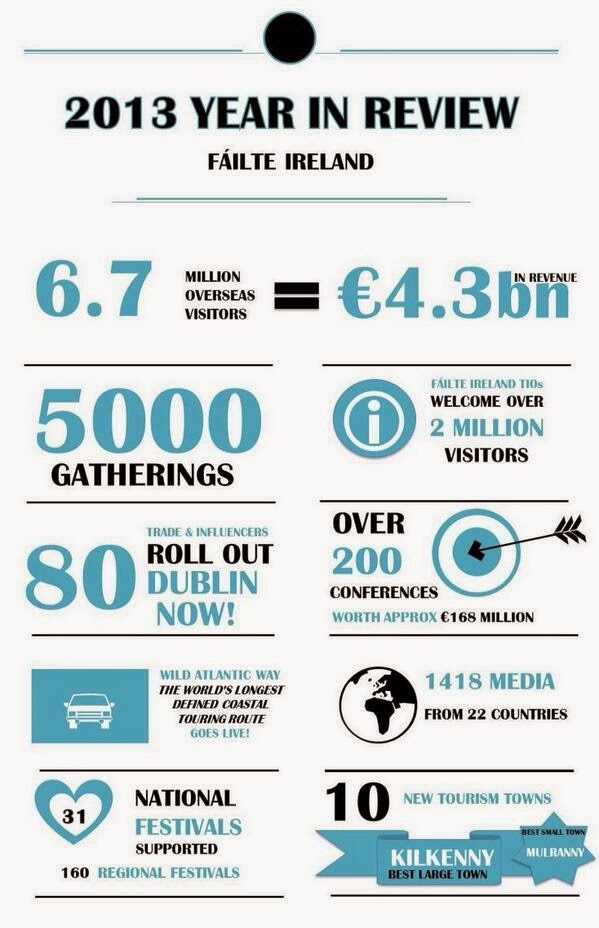 Approximately eight million people visited Ireland in 2013, generating €3.64 billion in revenue. Te hope is to get that to almost nine million by the end of 2016. This goal will be helped by new flights from San Francisco, Toronto, Europe and Great Britain, while Ryanair will add nine new routes from April.

He also announced the launch of the Sport Capital Programme which goes live tomorrow (17th January). This funding is the main channel of Government support for developing sports facilities and purchasing sports equipment for sports clubs and organisations across Ireland. Applications will be accepted from January 17th 2014 to 28th February 2014. The Minister pointed out how few golf clubs had applied for funding under this programme in the past. Personally, it seems like a no-brainer as long as your request fits within the parameters.

There's Always A Way
Then there’s the Wild Atlantic Way [YouTube video link], 250 kilometres of coastal route from the Inishowen Peninsula in Donegal to Kinsale in Cork, which will launch officially this year (and has dozens of golf courses along the route - blog on that to follow).
So, it’s all looking positive for the golf industry in Ireland and certainly the general feeling at the awards was one of optimism. Lord knows, we need it. Only a few days ago Doonbeg went into receivership and last year saw a number of courses disappear – possibly for good (Navan, St. Helen’s Bay and Woodlands) – while Lackabane at Killarney closed in late 2012.
But a good summer in 2013, that stretched well into September, saw golfing numbers rise, and with it the spirits of golf clubs around the country. There are still difficult financial times ahead, as the consequences of the last six years have yet to run their course, but the awards of last night will serve as a vital reminder that we still have some of the best courses in the world (6 in Ireland according to America’s Golf Digest Top 100 Golf Courses in the World)… and we still know how to give visitors a welcome they’ll never forget.

I have been asked a few times if I am involved in the award selection process. I am not. This is entirely a Portside Media endeavour; I have simply written an article on Ireland’s Great Golfing Challenges.

A Bit About the Publisher
Portside Publications is an Irish publishing company operating in the tourism sector for over 23 years. Its Golfers Guide to Ireland has enjoyed uninterrupted annual publication each year making it Ireland’s longest established golf guide. 50,000 copies have been printed this year and the Guide will be distributed and be available free of charge to every golf club in Ireland. An on line version will be distributed to golf clubs in Japan, Sweden, the UK and North America.

Portside Publications Director, Paddy McCarthy, said the Guide had become an essential part of the travelling golfer’s kit when planning a trip to or within Ireland.


Many thanks to Paddy for the invitation to join the party of 90 or so golfers and thanks, too, for the company on Table 6.

Posted by Kevin Markham at 9:15 PM