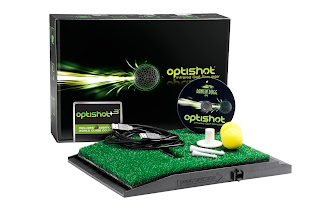 I’ll start with what may be the most important thing in this review – assuming you are in the market for a golf simulator such as this – which is that I don’t play computer games so I have nothing to compare the OptiShot with. There are no Playstations or X-Boxes in my house, and there are no games loaded on my computer or smartphone. Don’t get me wrong, I like them well enough, it’s just that with my addictive personality I sometimes can’t let go. I once spent 36 hours playing the entire EA’s John Madden NFL game non-stop, from Week 1 to the Superbowl showdown.

As a result, when I was sent the OptiShot game I had a devil and an angel on opposite shoulders and they have messed with my head. But I did manage to squeeze out a review and here it is:


The game is a lot of fun, more so when played with someone else - standing there alone, swinging your own clubs, seems a touch sad. I overcame that feeling by playing both Skins and Matchplay against myself – aka Bob, my imaginary friend. One of the great things about OptiShot is how easy it is to set up (although it is a struggle through a Mac) and I loaded up my own details, followed by Bob’s.  You can vary all types of things, both with the players (type of club etc.) and the course conditions (e.g. weather and green speeds), as well as the game/competition format. There’s a vast range of choice and this means it is easier to personalise it to your own game.


To start with, the most important suggestions I’d make are that you:

SET UP
Insert the disk, follow the instructions, load the game… you’re ready to go. I connected the laptop to the TV, using a HDMI cable, and it appeared on the screen automatically. All I had to do was change the TV screen size settings.

EASE OF USE
Just take the time to go through the menus, figure out where everything is and input your relevant golf club data.

If a technophobe like me can figure it out then it should be easy. There is a ‘but’ however, and it is this: I was playing for fun. If I was 160 yards out and my 7 iron only went 130 yards, I wasn’t too fussed. Some golfers may want it to be much more accurate.

It will take you a bit of time to figure out your clubbing, as well as what clubs to hit out of the rough and the bunkers (I went up two clubs, i.e. from an 8 to a 6 iron, and this worked for the most part). So be prepared to perform some adjustments in the settings menus.

In order to play, all you need is a net or a curtain or even a wall to hit the ball at. Obviously none of that matters if you’re not striking a ball at all, but I’d suggest not hitting against a wall if you’re using a real ball. Your head might not appreciate the rebound and your wife might not appreciate redecorating.

HOW DOES IT WORK?
You have a mat, with two rows of infra-red sensors, which you place on the floor. In between the two rows is the tee. Put the ball on the tee, hit the ball (when the green light behind the tee shows) and the sensors read the clubhead’s angle, position and speed to extrapolate the shot that you’ve hit. This then appears as the ball flight on the screen, sailing over water and between trees. After you’ve played you can see the distance hit, the angle of the clubface and whether you hit the ball in the centre, the heel or the toe. I found this very informative as, on a real course, I often catch the ball near the toe.

You can play around with loft and you can artificially alter ‘swing speed percentage’, so there are plenty of ways to programme OptiShot to resemble your real game more accurately. No doubt this should make it more entertaining.

I stress here that OptiShot is a game. It’s for fun. It’s not designed specifically to improve your golf, although it can be used to embed lessons learned (through repetition most obviously), and show some of the errors you frequently make (e.g. hitting off the toe or closing the club face). It can also encourage consistency through the information that is displayed after each shot. These are useful features that encourage better behaviour on the real golf course, but don’t expect OptiShot to reduce your handicap.

GRAPHICS/SOUND EFFECTS
There are 14 courses to choose from (and more ‘premium courses’ you can buy, such as St. Andrew’s and Pine Valley), including Bethpage and Torrey Pines as well as European and Australian courses, and to my eye these looked fine on the screen. Before you play each hole there is a flyover to show you the hole’s shape. Watching it on a TV screen brings out the colour. There are no ‘people’ to watch: ‘Bob’ does not appear as a simulated golfer, but because you’re swinging at the ball for real that matters little.

The real issue comes down to satisfaction, and when you hit what feels like a good shot and then you follow it through the sky to the fairway or green, there’s plenty of that. There are choices here too, and you can follow the ball or see it from the player’s standpoint.

There’s also the matter of accurately reading your swing/clubhead position at impact. For the most part I found this to be good. I tend to hit my irons straight, which was repeated on screen, and my snap hook with the Driver was beautifully captured by OptiShot. These things matter as you want to play ‘your’ game and it does encourage you to swing properly.

Sound effects comprise ambient birdsong, your shots and applause for good shots onto greens and birdies. Again, it adds a bit of fun, and particularly excellent shots get the review treatment.

NEGATIVES
None that stands out. It will be more fun playing with a friend, but I can see this being used during the long evenings and foul weather that bless this part of the world. You can set yourself up to play as a single, a fourball or however you want to play. Don’t want to play 18? Not a problem: play 9 or go to the range.

The difficulty with putting drove me to distraction at the start. You really have to ‘feel’ the shot, hence my recommendation above. The same applies to bunker shots and short pitches. I’d have liked the game to move a bit faster, but that was particularly noticeable when I was playing against Bob, so if there really were two people playing the game the pauses at the end of each hole would be less noticeable.

TIPS
The game assesses your shot based on the sole of the club passing over the infra-red sensors. The more reflective the sole, the more accurate the reading. Attach some reflective tape if you’re having problems.
The practice feature/range is extremely useful and you can practice different shots. This will be of particular interest to golfers who can shape shots.

AVAILABILITY
The OptiShot, from a company called Dancin Dogg, is available in Ireland from McGuirks - see link below.

PS. I suggest that you set yourself up as Bob. Whether it was Skins or Matchplay, he beat me every time.

Posted by Kevin Markham at 7:20 PM