"I can feel it running down my chest," Finbarr said, as we slogged through the rain on Carne's 8th hole.

I'd had water running down my legs since the 4th. Sometimes waterproofs come down to the gaps around the edges. And Ronan's 'showerproof' top was proving as effective as a fishing net at stopping the rain.

Here we were on one of Ireland's mightiest, most dramatic golf courses and you could see next to nothing. Every swing was uncomfortable, and every golf shot a stab rather than a swing. One of my goals at the start of this tournament was not to lose a ball. There was no fear of that at Carne - I could barely hit the ball out of my way.

The overnight rain had eased by the time we'd arrived at the clubhouse. The signs were looking good and it lasted all the way to the 1st green. Then in it swept.

We lost Ronan after the 9th. He'd had some physio done on his knee in the morning and, despite taking a buggy, he was struggling. At least he had an excuse: Finbarr and I were just appalling. Our scorecard showed a list of one-pointers and scratches... actually, that's not true: our scorecard didn't show anything because by the 6th hole it had turned to mush in my back pocket. I didn't write on it again. When I handed it in at the Pro shop at the end of the round, I was offered another one to fill in.

"Put down NR," I said. "Or perhaps 'DNR' would be more appropriate."

After Ronan left us - to return to the physio and a large bag of ice - the rain cleared and Fin and I had a burst of brilliance that lasted exactly one hole. With the wind behind, the 10th is a short par five. Fin (off 19) had a par and I had a birdie. I hadn't even had a par at that point. On the 11th, the guys behind caught up with us on the tee. I was bemused. At Rosses Point, Colin (who travels over for the event every year from the Isle of Man) was playing with a couple he didn't know; at Carne it was a young lad by the name of Scott. Turned out that Colin's 'team' had looked at the weather and sent Colin a text saying they weren't interested in playing. Charming. A 'ringer' had been brought in at the last minute.

"I was lying in bed watching TV when I got the call," Scott told me. Half an hour after that he was on the tee. 16 years old, a Carne member and a 12 handicap... which would be a 6 handicap on any normal course.

Carne is anything but normal - it is one of Ireland's best golfing experiences, even in the swirling, mind-numbing downpour that cloaked us for the first two hours. At least I have the opportunity to return as I'm playing here again on Thursday. Forecast: somewhat better.

Here's a Video shot on the 14th tee. You can tell it's a little bit windy. 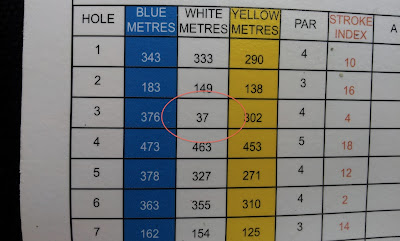 And in one of the more entertaining coincidences... after Rosses Point delivered the longest par three in the world, Carne now has the shortest par four in the world (and Index 4 to boot).

Posted by Kevin Markham at 8:33 AM