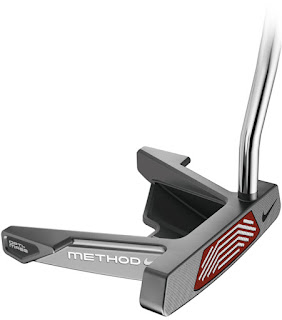 Are putters not the most personal club in the bag! Certainly there can be no club with a wider array of shapes, sizes and lengths. Blades, two balls, darts, hotblades, belly, mallets and horned beasts of the apocalypse.

I’ve always struggled with putters. Put me 180 yards out with a 5 iron and I’m a happy man…
... put me three feet from the hole with a putter and I’m a wreck. I know, I know, it’s not the putter that is the problem. It’s in my head or, as the joke goes, the lump of crap on the end of the putter. If there’s no confidence, no ball is going in that small hole.

But how much confidence does the ‘right’ putter give you? A friend of mine, Daniel, is lethal with his blade putter. It is so small it looks like it’ll go right under the ball. He plays off 18 and uses it brilliantly. At least once during every round he declares his love for it. I look at mine and file for divorce. Is it any wonder he sinks them and I don’t.

Am I Alone Here!
Answer me this: how did you choose your putter? Recommendation? Looks? Feel? Price? And where did you get it from?

The thing is, I cannot bring myself to buy a new putter. I do not want to invest €120 in a club that I know I’ll always fear, occasionally reward with a loving kiss, but usually slam back in the bag.

So I came up with a simple solution: get my dad a new one for his birthday and then slink off with it… after an acceptable period of time (two weeks as it turned out). Even better, get my sister to buy him a putter and improve my alibi.

We All Stand Together
My dad and I were chatting recently, discussing our putting woes (his are actually worse than mine), and we did a quick evaluation of the putters that we own between us. We have four: he has two, both of which are mine (one I won and one I bought in 2004); and I have two, both of which are his (gifts from my sister and me).

It got me thinking: do other people find themselves in a similar position? I did a little research and asked the following question on three different golf forums:

Where Did You Get the Putter You Are Currently Using?

It is the last set of figures I was interested in. I appreciate that 193 responses are hardly conclusive, but the Irish seem more willing to borrow/give a putter than their British and American counterparts. It doesn't prove a thing of course, but it makes me feel a lot better!

A couple of people replied to say they made their own, so that’s a category I could have included. Then again, the last time I had a putter made for me was when I was nine, and my grandfather made it out of insulating pipe and a block of skirting board.