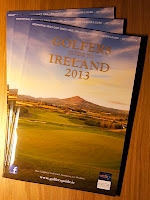 The launch of The Golfer's Guide to Ireland 2013 includes a long article on the different and best Irish Golf Challenges this island has to offer, and this appears at the front of the Guide. I submitted the piece in late November, and since then there has been an update to two of the tournaments: the oldest and my favourite - the Causeway Coast Challenge and the Atlantic Coast Challenge.

A new tournament has also made an appearance: Let's Play Golf Open

The Causeway Challenge has launched an App for their tournament.

It is designed for anyone who's interested in the tournament - whether entering or simply trying to find out more. It introduces a leaderboard which will be updated over the four days, gives you a chance to submit photographs, provides maps and allows you to find a place to stay (from hotels to self catering). It will also include special offers. 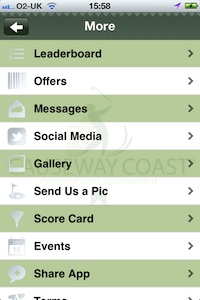 It's a nice touch for what is the oldest amateur tournament of its type in Europe. What's more, you could win one of a handful of free entries to the tournament (3 in January, 1 in February, 1 in March...).  ENTER HERE. (You can get your App downloads from this page too.)

The cost is £200... but here's the gem: you are entitled to a free practice round on each course.

The rate of €120 for the tournament remains in place until May 31st, but there have been a couple of format/event changes!

The format is teams of three and singles Stableford. For the last two years all three scores counted towards the team's score. This has now been changed with only two scores to count in each of the three rounds. So everyone is entitled to an off day. The Singles format remains unchanged.

There will also be monitoring of the top 10 teams on the final day. The event is being sponsored by the Diamond Coast Hotel and the prize giving will be at the hotel, at 9pm, followed by a complimentary barbecue.