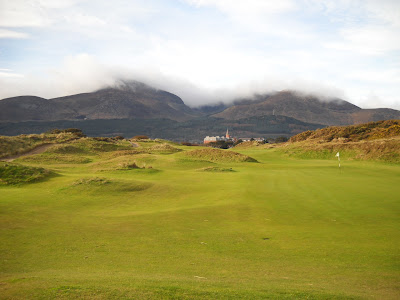 [Photo: view from the 2nd tee, back over the 1st green to the Slieve Donard Hotel and the mountains beyond]

Dark grey skies were pressing down as we left Dublin. Two hours and 15 minutes later we were at Royal County Down, breathing in the atmosphere and basking under sunshine and velvet clouds. February 23, 2012 and it was 14 degrees C. Add in a two-club wind and could you ask for better links conditions than that?

There are several clubs around Ireland, where the reputation and history seep into your bones from the moment you step out of the car. Lahinch, Royal Portrush, Ballybunion, Portmarnock and Royal County Down are the most obvious. It heightens the moment, and I doubt there are many golfers who could tell you otherwise. Everything about this place oozes class. There’s a sense of quiet decorum, too. It urges you on towards the 1st tee.

Lenny, the Starter, was getting me and my father out ahead of a fourball – good thing too: by the time we were on the 8th, the fourball were on the 3rd. No one behind us, no one in front of us; no pressure. It gave us time to enjoy the course, and me time to take a lot of photographs. 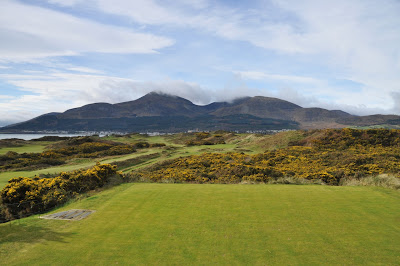 [Photo: the beautiful par three 4th with the Mourne Mountains behind]

The last time I played here was with my father and a couple of friends in 2007. Five years ago… it seems utterly ludicrous when a course this good is just a two hour drive from Dublin, and costs a mere Stg £50. (That rises to £75 in March.) Then again, I had a few other courses to play in between.

It is almost impossible to describe Royal County Down in simple terms. I could write a few hundred words talking about the wild rough alone, an essay on the bearded-faced, treacherous bunkers, a thesis on the silken greens that flow so easily out of the land, and a trilogy on the course design that is so subtle and perfect you can’t imagine the dunes could have ever have been created for anything else. I’d pen a sonnet on the surroundings, too, but my poetic abilities stop at the Limerick… so I’ll use someone better suited to the task:

A thing of beauty is a joy forever. So said John Keats, and that sums up RCD in a nutshell. 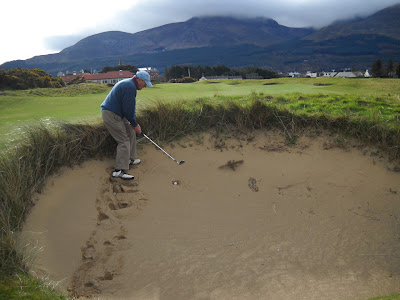 [Photo: bunkers are never a good place to be!]

Length aside, what most people remember and what causes pulses to race are the blind shots. They are not to everyone’s taste (Jack Nicklaus, for example), but what a joy it is to crest the dune and see that little white ball on the fairway with, more often than not, the Mourne Mountains looming behind.

Missing the green also leads to plenty of trouble. Balls simply slide off the edges and trickle away down slopes and into trouble. In February, the slick surfaces were mercifully forgiving and long irons settled quickly. In summer, it’s a case of goodbye and good luck. 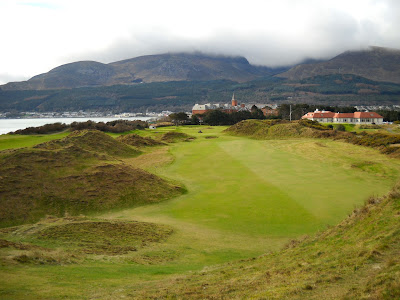 [Photo: the view of the 9th from the dune crest, after the most difficult drive of the day]

Most golfers will walk away from RCD with holes 4 (a par three) and 9 (a tough par four) firmly in their minds as their favourite hole. Personally, I consider the 9th to be the best 9th hole in the country, and one of the best holes full stop. But I also love 3, 5, 11, 13 and 16.

The intrigue and challenges are relentless, which mean every hole is exceptional. There is no such thing as an ‘obvious’ hole (only the 18th comes close) and – blind holes aside – you do get to see what’s expected of you. If you believe in your swing 100%, then you feel like you’ve got a fighting chance. 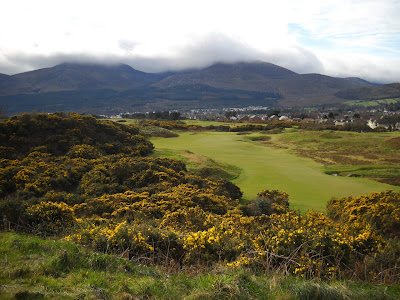 [Photo: the short par four 16th. The usual tees are well to the right, giving this hole more of a curve]

I did most of my fighting on the greens, watching long range putts slip by and keep on going for six feet or more. I didn't get one putt back.

[Video of Dad smacking one down the 12th]

My dad, 80 years old, playing off a 20 handicap, was kicking my butt. He missed two fairways all day and eased around the back nine with 20 points that could so easily have been more. That liquid swing of his was working a charm and I realised that if we’d been playing off scratch (I was giving him 14 shots) he’d still have taught me a lesson. He had four pars, which is more than I managed. I lost two balls, he didn’t lose one. I was a hang-dog walking up 18, he was strutting his stuff, laughing that we'd played almost every hole in sunshine.

And he treated me to lunch, suggesting that we make this an annual excursion. You’ll get no argument from me, although I'll need to practise a lot more between now and then.

Posted by Kevin Markham at 8:49 PM