Druid's Heath - the Devil's in the Detail 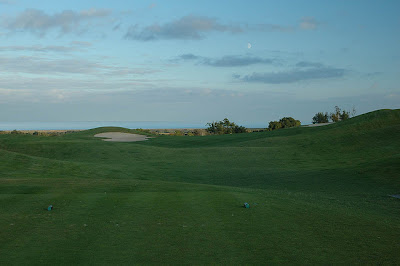 [Photo: Hole 1 par four]
"We had a lot of rain so the fairways are a bit on the soft side," said Mark in the Pro shop at Druids Heath, before sending me and my mate out, courtesy of the course.
As an Irish golf writer, I am always grateful for the opportunity to get back and review clubs that have scored well in my book... and even more grateful for the chance to play the ones that don't score so highly. Sometimes it's important to reassess and see if you've been off the mark.
Druid's Heath falls into the latter scoring category, receiving just 74 out of 100, despite oozing quality. The truth is, I can't warm to the course. It has everything that a top course demands - the quality, the greens, the water and the space - but there is that sense that it has been shaped to be difficult, and there aren't many of us who need a battle this tough. You don't always see your landing area (plenty of mounding, shoulders and natural elevation block your views), which means you're automatically that bit more tense standing on the tee... and on a course that measures 6,600+ yards from the whites, you're probably already tense. Unless you crush the ball 300 yards (and there's been a lengthy debate/argument on boards.ie about this subject) I suggest you play from the green tees (600 yards shorter).
Charlie and I only managed 9 holes - he got called back to the office and I was designated driver - but we enjoyed what we played. If you know what's coming then you're better prepared for it, so neither of us had expectations of peeling off birdies or pars. Add to that a four-club wind and a par was a rare treat. The 9th is 347 yards and was straight into the wind. I'd expect to hit driver and a gentle wedge on a calm day, but a full drive and 3 iron left me well short. That in itself can be taxing. 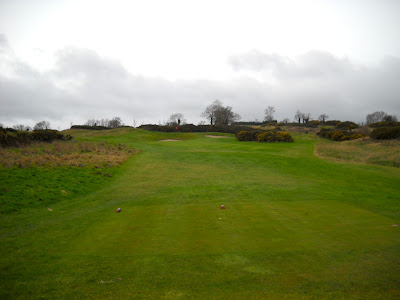 [Photo: the par three 5th. A tough target to hit, never mind the green slopes]
And the greens are not easy to attack because if you miss there is trouble everywhere. They can also be brutal: on the par three 5th I was 25 feet from the pin. I aimed six feet to the left and knocked the ball up and over the ridge, and then watched as the ball glimpsed briefly at the hole, turned 180 degrees and set off down the other side of the green... leaving me further away than I started. Imagine what these surfaces could do to you in summer!
No, there is practically no forgiveness here. I'd go so far as to say that if the Devil was playing you for your soul, this is the course he'd choose for the match... and you'd probably give him a walkover. 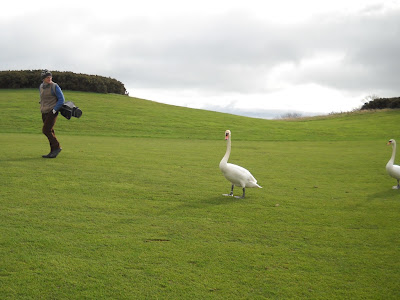 Don't get me wrong, Druid's Heath has quality in abundance (see some more photos here), and despite Mark's comments about the fairways they were grand. It's just not a course that fills me with enthusiasm because my golf needs to be able to get away with bad shots and I need to have some holes where I can relax a bit - Druid's Heath doesn't offer that. It's a serious test. If that's what you're after, you'll love what the Heath has to offer.
I'll come back in the summer and play the whole 18, see if the greens are as difficult as they appear, and play probably the most feared hole in Irish golf: the par four 12th - 462 yards off the white or 419 yards from the greens.
Posted by Kevin Markham at 7:01 PM