A great piece of news: Paul Dunne, a member at my home club of Greystones, has been selected to the Walker Cup panel for 2011, which takes place at Royal Aberdeen. He is 17, plays of +2 and has one of the best short games you'll see. 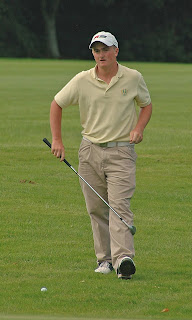 He is garnering himself an impressive reputation with victories in numerous tournaments, caps for the Senior Irish Panel, and last year he became the first person to defend his Irish Boys Amateur Close Championship title. Not even Rory McIlroy did that.
It's hard to believe that a few years ago I played against his dad, Collie, when a scrawny twelve year old Paul caddied for his old man. These days it's the other way around.
Paul is a name to watch in the years ahead. Let's hope he makes the team.
Posted by Kevin Markham at 8:20 PM