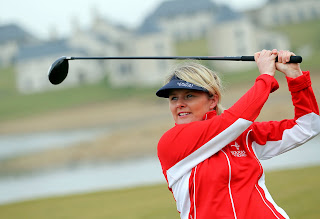 It's great to know that Lough Erne Golf Resort is keeping up its high profile with some quality appointments. Rory McIlroy already represents Lough Erne on both the European and US PGA Tours, and now the resort has appointed 37 year old Lynn McCool as the head professional.

Born in Ireland, Lynn has considerable experience behind her. She is a former European, Asian and South African Tour pro, and she was head pro at the K Club when it hosted the Ryder Cup in 2006. She was also the director of golf at the Hilton Templepatrick Golf Club in Co. Antrim.

Lynn has done well for herself. After winning several amateur titles, including the Ulster Girls Championship, she won a golf scholarship to the University of Hawaii. I bet that was a hard decision for her to make: the climate of Ireland vs. the climate in Hawaii.

Her golf work has been broad: she has run golf schools and corporate golf days, as well as working on marketing and advertising campaigns. I imagine the latter will come in use as the downturn bites and the glamourous resorts struggle that much more.

And seeing as she's a rather attractive lady, she has also graced Sky Sports Ireland and BBC Northern Ireland.

Posted by Kevin Markham at 8:50 AM