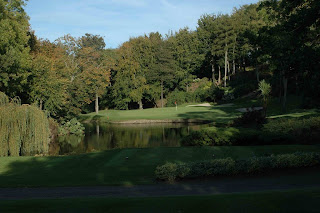 Since Druid's Glen came up with the ingenious - not to mention generous - idea of offering free tee times (normal green fee = €90) for a month, they have been oversubscribed by a landslide. From what I've heard, they had 20,000 applications before they realised they had to shut off the offer.
In terms of numbers, let's assume 30 days of 'free golf', with 20 free fourballs a day => 2,400 golfers will stomp one of Ireland's finest.
At the start everyone was whoop-de-doo about the offer, but then up popped the naysayers:
Moan, moan, moan! Here's a club offering free golf, on a course that is not being used much at the moment. What's wrong with that! Presumably green staff have to be employed to look after the course whether or not there are golfers on it, so why not put the course, and green staff, to good use?
By the time the offer is over, in early March, golfers who have never played it before will have experienced its greatness. They may choose to go back and pay, they may not; they may join, they may not. And Druid's Glen has all the emails for future activity. In tough times, that's an important marketing advantage. The most powerful marketing weapon any company has ever had, is word of mouth and, combined with the emails, who knows what the course has planned. Personally, I'd recommend doing a similar thing at the end of the year or the same time next year, only this time charging €10 or €20 and running a competition.
And if the course does take a battering, then they have a few weeks before the busy season starts - plenty of time for the course to recover. And plenty of time for people who have played it to encourage their friends to go and visit.
Posted by Kevin Markham at 1:38 PM