The Short Game - The (short) Review 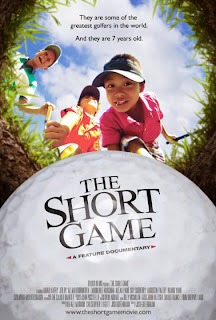 A feature documentary was released in September 2013, entitled The Short Game. It follows the lives of eight golfers as they prepare to compete in the 'World Championships' of golf at Pinehurst in North Carolina... and then compete in the three day event itself.

It's probably important to mention at this point that these golfers are seven years old and they're competing against their peers from over 50 countries.

Is it worth a look? Absolutely, and here are 10 reasons why:

1. The swings these kids have are astounding. As the movie rolls and you see some of them hit a ball, your eyes will go wide and you'll say 'wow'. Amari Avery and Alexa Pano have swings of beauty and power - you have to see them to believe it - but they are all incredible youngsters and they hit the ball 170 yards plus off the tee... and they're only 7.

2. There's a Kournikova in it... not Anna (though she appears fleetingly) but her precocious, mouthy and extremely talented little brother, Allan.

3. You get to compare the brashness and single-mindedness of some of the American kids (and their parents, grandparents, coaches... and even a pet) against the calmer, more laissez faire approach of the... how shall I put this... non-American kids. You get the feeling that some adore what they do, while others are 'encouraged'.

4. You get to see the tears and the tantrums, and you can't help but feel sorry for some of them. You also get to see some of the bad traits that we, as 'adult' golfers have learned to hide... such as the pleasure Allan Kournikova takes after he discovers his main opponent has had a disastrous round. And Amari Avery has some temper on her.

5. The rules of this competition are crazy. One of the favourites for the trophy is late for his tee time after a rain delay and his penalty is appallingly unfair.

6. You meet the parents! Yes, the kind of parents you read about who drive their kids relentlessly. At times it is painful; at times you'd like 10 minutes alone with them, wielding your 7 iron; at times you'll wonder why it is you need a licence to have a dog but not one to breed children. And then there are those who are far more relaxed about the talents their children possess.

6a. You meet the kids, some of whom are utterly driven (never mind two incredibly annoying fathers), expect to be the best and won't stop until they are. Alexa Pano is a dynamo - her work ethic puts most adults to shame.

7. You meet Zamkuhle Nxasana and his family. If this guy and his dad don't make you smile check your pulse.

8. You get a few (though not enough) pearls of wisdom from some of the greats (Player, Nicklaus, Sorenstam and Rodriguez).

9. The credits list eight names to remember in the future. You can't tell me that one of these kids isn't going to hit the big time. 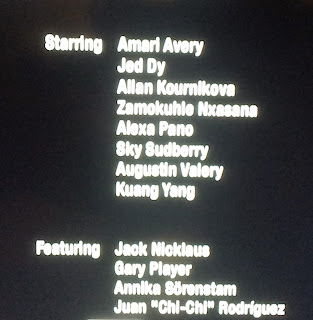 10. And finally... the simple jealousy of watching swings we can only dream about and golfers who have achieved more at seven years of age than we will achieve in a lifetime. It's sobering.

You can watch The Short Game on Netflix.
Posted by Kevin Markham at 11:50 AM