Inside The Ropes - Adare Manor Hotel and Golf Resort

My drive on Adare’s 15th had refused to draw. Not even an inch. It soared above the River Maigue and landed right on the water’s edge, deep in the reeds.

Three off the tee, with an optimistic ‘provisional’ called… after a few other choice words. We walked up the smooth, silken fairways that lie like carpet across Adare’s golfing landscape. All four of us looked at the reeds, shrugged and jumped in.

“I’ve got something,” Darren said, enthusiastically rooting a ball out with his foot. A new Titleist ProV1. Not mine. He found another Titleist ProV1 immediately afterwards, but of mine there was no sign. Then I stood on something. Even if it wasn’t my ball I expected a club like Adare to offer up a worthy replacement.

A Prostaff. Except it was worse: it was a Lady Prostaff. Oh well, at least my dad will get some use out of it. He’s never too fussy what he hits over the trees into the farmer’s fields behind his garden.

It was inevitable that Inside The Ropes was going to visit Adare Manor Hotel and Golf Resort. This is the best parkland in Ireland, in my opinion, and it was time to get the views of some other amateur golfers. On the tee were Padraic (17 handicap), Darren (4) and Mark (6), from Beech Park, The European and Cregmore Park, respectively. (The full list of scores and links to other Inside The Ropes courses are at the end of this post.)

The guys loved the place. I know this because of what they told me on the course and also by the length of time they spent filling in the questionnaire in the clubhouse afterwards. Here’s what they had to say.
Q. What are your overall impressions of the course?
Padraic: Fantastic. There isn’t a weak hole on the course. The back nine, especially from 12 onwards, are super.
Darren: From the moment you drive through the gates you know you’re somewhere special. You can't say that about every top course. I loved Adare and, apart from the 5th, you could see the layout of each hole, which I like. It wasn't hilly at all and the whole flow and layout of the course was great. I never got the feeling that a hole was put in somewhere just to fit it in. I also love a course that saves its best until last. Although 17 is a nice whole it is sandwiched by the two most dramatic holes on the course. Like most of the holes here, 16 plays with your head a little. You feel the target is closer than it is, as three of us found out *splash*. 18 is a joy to play, even though I didn't cover myself in any golfing glory whilst playing it. All in all a fantastic set-up in every way.
Mark: Lived up to the hype. A stunning parkland that is a real test of golf for all levels.

Q. What are the course’s three best features? What really stood out for you?
Padraic: The greens were great and the greensides were well maintained. There were some very tricky putts out there. The par threes are all very tricky and interesting. Love the use of water on last six holes and the view of the Manor in the background is sublime.
Darren: Views from every tee box. All but one you could see where the fairway went. Greens!!! Hit a putt on line and it held its line. Scenery – even while playing badly the scenery cheered me up.
Mark: The greens. Fast and undulating. Make sure you’re in the right spot! The layout/design means nearly everything is visible in front of you, but requires thought off the tee. Views at most points of the course.

For me, one of the best features was the two tubs of jelly beans and jelly babies being transported around the course in Darren’s bag. He was a walking confectionery shop and I’m always in pursuit of a sugar rush when I’m playing badly. Darren thinks the same way and his tubs were raided frequently on the closing stretch.

Q. What was the most rewarding/fun part of your round, and why?
Padraic: I enjoyed every aspect of it – good fun with the lads. I got most enjoyment out of my par on 18.
Darren: The way we were made to feel right at home from the first minute and of course the lads in the group were good craic.
Mark: Keeping the ball dry on 18. As one of Ireland’s most recognisable holes I was delighted to achieve that.

The par on 18 by Padraic was a thing of beauty. As Mark points out, this is an instantly recognisable par five – it is also Index 2. Padraic sliced his drive into deep rough, hacked out and then hit his third parallel with the River Maigue. Some 160 yards out he hit his approach over the water to about two feet, producing what was undoubtedly the shot of the day. While 4, 6 and 7 handicappers struggled on this brilliant hole, Padraic strolled off with a par.

Q. What did you find particularly tough about the course?
Padraic: Undulating bunkers – if you missed the green your ball was going to roll into them. Greens are very long and undulating too – if you hit the green in the wrong place you could have some seriously long putts.
Darren: The hardest part for me was trusting the yardage. I doubted it on at least 12 of my approach shots. The bunkering had a lot to do with this – great design.
Mark: Bunkers. They were well positioned off the tee and greens were well protected, but the lack of sand made for tough going.

It is fair to say that Mark drew the short straw when it came to putting. On three greens on the back nine he left himself the longest putt possible - the one on 18 curled over a large ridge and measured 40 feet at least. Looking at these swirling undulations makes you appreciate just how crucial it is to know which side of the green/pin to land. It makes playing approach shots (especially when you’ve missed the green) all the more challenging. Three putts are not merely possible, they are probable… just ask Mark!

Q. How did you find the shot-making – did you find the shots you were playing interesting – did you have to think about them? Highly varied, or were only a few clubs used all the time?
Padraic: Very interesting – some challenging tee shots. A lot of long irons and rescue woods.
Darren: I’m a fader of the ball, so I struggled on a few tee shots. I tried a few draws that ended as snap hooks. I used 13 of 14 clubs and hit a lot of four irons.
Mark: The course challenged all aspects of shot making, so no ‘grip it and rip it’. Tee shots had well protected landing areas and all shots into greens needed thought and precision.

This is such a critical question as it goes to the heart of what golf is all about – playing well with every club in your bag and being tested on every shot. The more of that there is, the better the design… which makes Adare the ace of spades.

You’ll note that Mark and Padraic were sitting next to each other in the bar!

Q. What was your favourite holes, and why?
Padraic: 18 – pressure on drive, second and third shots. View of the Manor too. Also loved 16 – a tricky par three that’s longer than it looks.
Darren: Very difficult to pick one as not a weak hole on the course. The 7th is great design, but for sheer drama it has to be 16 and 18.
Mark: Take any one on the back nine! The par threes are particularly strong.

Q. If you were coming back in a month’s time, what’s the one thing you’ll need to remember in order to score/play well?
Padraic: Keep the ball straight – no need to take driver on every hole.
Darren: Club choice from the tee. I chose the wrong one on several holes. Also, hit the ball to the heart of the green.
Mark: Make sure to be on the right side of the green. Even missing greens on the right side can be better that putting from distance.

Q. Any final comments?
Padraic: I wanted to go back out and play again straight away.
Darren: Best parkland course I have played to date.
Mark: A fantastic test of all-round game on a superbly presented course.

Q. Value for Money (currently €60/€70 per person) Out of 10
Padraic: 7/10. A lot of good courses out there for 50 or less. Worth it for a treat now and again.
Darren: 9. I would gladly pay that. As I’m in Wicklow it would be a once-a-year trip, so for that I would find it value for money. You’re getting to play a top, top course and cheaper than most top courses.
Mark: 7. As a personal opinion anything greater than €50 is expensive.
Total = 23/30

Adare is a two hour drive from Dublin. Is that too far for a round of golf? I’ve driven further, and after a six hour round at Tralee the previous day, it felt like a stroll in the park. So yes, I’d happily drive that far to play a course as good as this. And as it happens… … Adare’s annual Winter Golf Challenge is about to kick-off. A fourball can play for €180 on one or more of 13 dates between now and March. Full details are on the poster. 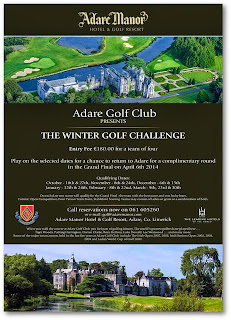 Click on the club names to read the reviews.