Perhaps it’s the time of year, or the way the weather patterns have favoured Ireland’s greenkeepers, but there’s a lot of talk about how good greens are at the moment. Black Bush, Lucan and Wicklow were all mentioned while we played at Macreddin, and recent visits to Dun Laoghaire and Druid’s Heath have revealed similarly pristine surfaces… and Macreddin was no different. Considering the pounding that they have taken recently from the rain, they were perfect.

Macreddin is the third course to be reviewed for ‘Inside the Ropes’ and Paul McGinley’s course rarely gets the recognition it deserves… which is a shame because there are perfect golf holes here and some thrilling challenges.

The three lads who were going to decide how perfect and how thrilling were Derick (9 handicap), David (13) and Graham (6). 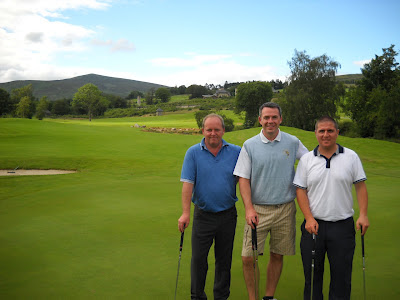 [Photo: The Inside The Ropes Macreddin ‘Panel’ on Macreddin's 18th green]

Q. What had you heard about the course before you arrived?
Derick: Very little. Paul McGinley was involved with the design. I looked at their website before arriving and the course looked tight and difficult.
Graham: High standard – a very hilly, quality course.
David: Scenic, very hilly, exciting… in NAMA.

It is a common misconception that Macreddin is in NAMA. It’s not. It was in administration for a while which is why plenty of people think it’s owned by the ‘pipple’ as Enda would say. It has been under new ownership for over a year, and the club is adding things on all the time. The buggy paths were added last year, and showers went in this year, with more work being done. 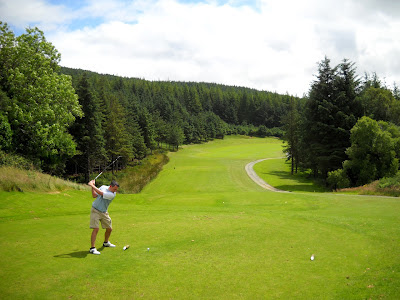 [Photo: Having birdied the 1st, David takes the honour on the par five 2nd]

Q. What are your overall impressions of Macreddin?
Derick: Long and nice track. I think they have done a splendid job with the land. I would next like to walk it, but it was a pleasure to play with buggies. The course held up well for the amount of rain we have had lately. Overall a more than positive experience.
Graham: Excellent setting, very demanding. A real test.
David: Beautiful, really enjoyed the round. Some cracking drives and second shots. Ballycreen Brook makes some nice appearances.

It has reached a point that most people take a buggy (€20 each) because of a couple of hikes: from the 9th green to the 10th tee is a long walk past the clubhouse and the hotel, and the walk from the 18th green is almost as long. There’s also the small matter of the climb up the par five 15th, which would sap the energy of most golfers. The downside is that buggies do detract from the round – you simply don’t get the same feeling for the course when you have to stay on the buggy paths. It’s not as if Macreddin can do anything about this, so you have to decide whether you went to expend the final ounces of energy climbing 15. At least it’s all downhill from the 16th tee. 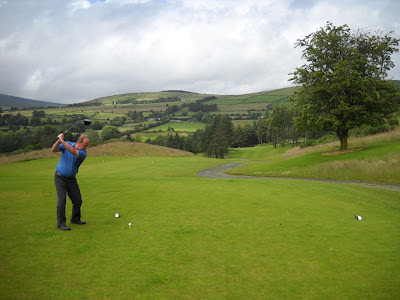 Q. As this is a relatively new course – what did you think of the design? What really stood out for you?


Derick: Design is really good. Holes on the back 9 look a lot more mature than their age. The greens were excellent with lovely views.


Graham: Design is stunning, although a little hilly, but course more than makes up for it. Each hole feels exclusive. Greens are flawless.
David: Each hole really holds its own and they’re nicely secluded. They built the course nicely around the forest.

Q. Are there any negatives – either on or off the course? If so, what are they and what would you suggest to fix them?
Derick: Showers and changing rooms could do with some attention.
Graham: Clubhouse. On-course signage could be better.
David: Long hikes between some holes – but no solution to that. No decent clubhouse. There were very few people on the course, so no great buzz.

The clubhouse remains a series of green portakabin-type structures. There’s the reception and small shop in one, and then the changing facilities for men and women. It’s not fancy by any means – hopefully the money will be there in the future for a modest clubhouse. It would certainly add to the experience. 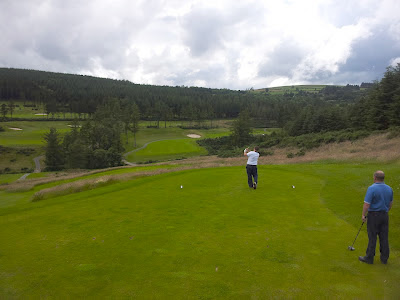 Q.  What did you find particularly tough about the course?
Derick: Some of the lies in the rough were very tough, and one or two greens were hard to read. It can also feel very long in places.
Graham: Driving needs to be accurate. The rough is very penal. Would not like to walk it every week!
David: Drives. You need to be long on a lot of tight par fours. 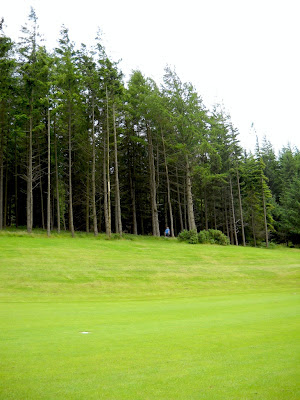 [Photo: Derick finds tough rough up in the trees on the 2nd hole]


Q. What’s the best Irish course you’ve played to date, and how did Macreddin compare?
Derick: Druid’s Glen. Macreddin is not as mature, but it’s similar in a lot of ways – it has a very similar finish, and possibly a bit more difficult in areas.
Graham: The European Club. Macreddin is a totally different course, but it would fayre very well with its high standard of greens, fairways etc., and stunning views.
David: Concra Wood, with its forest and Lough Muckno. Changes in elevation are similar. 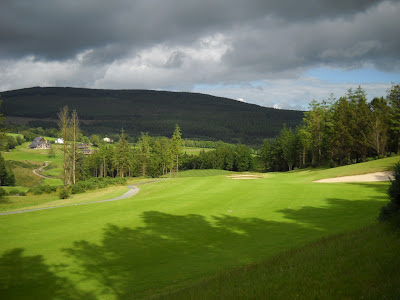 [Photo: the stunning approach to the par four 16th. You’re at the top of the course and this is one of Macreddin’s toughest holes]

Q. How easy was it to find?
Derick: Very easy
Graham: Very easy
David: Pretty difficult despite google map and print-out of directions. Ended up using the phone.
An interesting disparity!

Q. Would you come back with friends?
Derick: Yes
Graham: Definitely, and will do very soon.
David: Yes, some friends would love it here but no more than once a year! 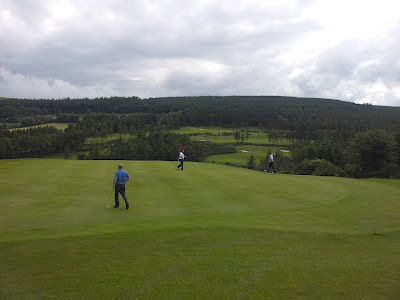 [Photo: the guys on the 11th green, with much of the back nine beyond] 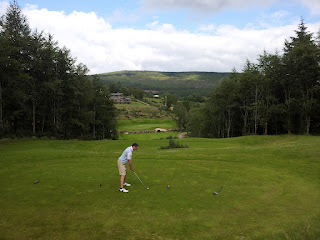 [Photo: David tees off on the par three 17th. He fluffed it and then put the next shot six inches from the hole. One of the more interesting pars of the day.]

Other 'Inside The Ropes' Courses:
Druid’s Glen
Dun Laoghaire

Posted by Kevin Markham at 7:24 AM

Email ThisBlogThis!Share to TwitterShare to FacebookShare to Pinterest
Labels: Inside the ropes, Macreddin Golf